“Welcome to the Film Center, ” greets two friendly faces, and sometimes more. These are co-founders Paolo Davanzo and Ken Fountain of the Echo Park Film Center, located in the heart of Alverado art complex. Being next door to 33 1/3 Book store and skateboard shop, center confortably welcomes various visitors to explore their offerings, since its opening in December 2001. It’s a store that specializes in 16mm and Super8 equipments, an archival resource (video rental for$1/wk), youth media access center, a theater offering weekly screenings, and a 8mm & 16mm repair shop all in one. 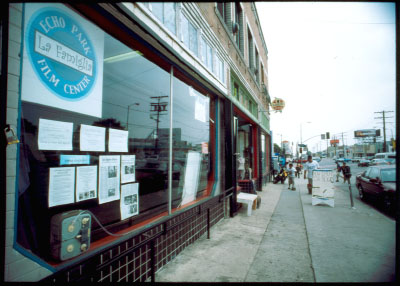 Italian decent Davanzo proudly displays the sign “La Famiglia” (meaning ‘the family’ in Italian) on his storefront window. “That’s what it’s all about, ” continues Davanzo expressing his intention to nurture community based microcinema in this film capital, Los Angeles. “This city is so much about commercially successful films and unfortunately does not offer much support in the true art of film making. We are more inclined towards non-narrative works, such as experimental films or documentary,” kind of films that usually do not get a break in Hollywood. Although Davanzo responsively pre-screens and curates all weekly screenings, every Thursday offers a different types of showcase and audience comes back for that diversity. 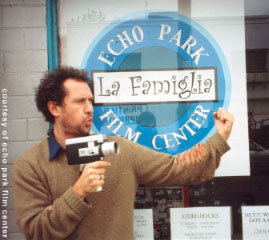 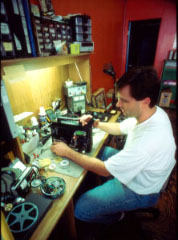 Most of the films are non-language based, sometimes silent that often DJs, opera singers, and even a punk band accompany the film presentation. The show sells out every week, and this usually spacious floor is filled with various generation film lovers. “It’s so popular that now we have special screenings on Fridays and Sundays too.” indicates Davanzo. Truely, the Center has offered its screens to Slam Dance fundrasing, Silverlake Film Festival (that have credited Mike Mills and Geoff McFetridge as a local participant), the guerrilla-style Echo Park 24 Hour Film Project (where you call in to get a theme and shoot & edit in the same day for next day screening) and many more to come. 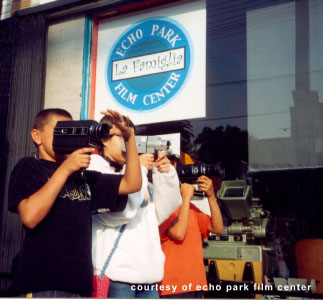 Being a passionate film maker himself, Davanzo used to travel all across the globe leading the tour “Super Super 8 Roadshow”, with his Polyester Prince Production films. It all started as group screenings of his friends’ films or something he picked up on the road. Roadshow reached places where those kind of entertainment was rarely enjoyed. Several years of touring and experiencing the reception in each community, Davanzo finally felt ready to set up a home for his movement in this city he grew up.