In the early spring of 2002 designer and artist Roosje Klap initiated the already infamous Club Plak (Club Paste). One evening (there was) a group of 20 friends, all artists, musicians, designers and so on, (were) present at her home. Together they decided action needed to be taken and they formed the autonomous ‘Club Plak’, their mission: to reclaim lost public space in the over organized world. 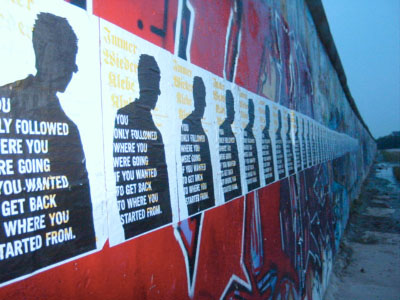 Every second Monday of the month Roosje’s Club comes together to discuss and philosophize on future developments. Subjects like; What is public space? Where does it begin and where does it end? are being discussed. Recently an evening was build around the phenomenon of random text. Discussing the beauty of odd text (errors) or surprising combinations of words seen in the public space around us. In short Club Plak creates, initiates and forms opinions and new ideas. Some to be executed in the world while others remain ideas and thoughts. 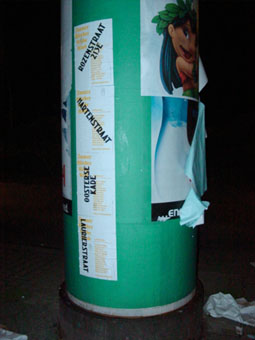 The most recent fly poster extravaganza just ran in Berlin. Upon Agata Zwierzynska’s (from Kunstlerhaus Bethanien) invitation the Immer Wieder Klebe Klub, as Club Plak is called in German, hurried to invite 14 artists to participate in the ‘Half Way Home’ project. A project which attempts to define, discover and materialize the ‘feeling of belonging’ of people who are living in between places, or whom are simply living in an other place than their home country or town. In this case all artists that participated, were or are, in one way- or another half way home. 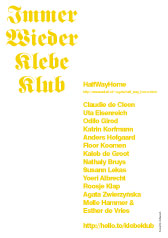 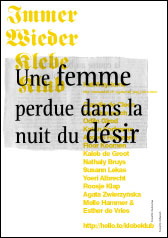 The artists brought with them 13 souvenirs from Amsterdam to be fly-postered on various walls in different areas of Berlin. Everyday turned out to be completely different. Each day a fitting location needed to be found to match the message of a poster. Sometimes putting up the posters felt like a political statement, for instance Odilo Zjiro’s poster was stuck on the remains of the Berlin wall (You only followed where you were going if you wanted to get back to where you started from.). Sometimes it was very emotional like Yoerie’s poster with a poem hung on the spot where Albrecht Haushofer was shot in the back two days before the Russians liberated Berlin April 27th 1945. 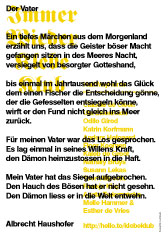 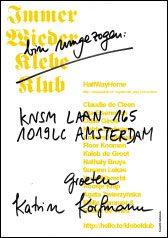 One of the most special posters was the one by sound artist Nathalie Bruys who chose the Hansa studios as display, the place where David Bowie recorded ‘Heroes’ (which was dedicated to the brave inhabitants of East-Berlin), everyone involved experienced this in awe. While finding the right locations for all posters it became clear what kind of heavy history can be found on almost every street corner. The last posters were done bij Roosje and Agata, they both had posters with their own portrait, Agata started from her home (Mitte, West-Berlin) and Roosje started from her (temporary) home (Kreuzberg, East-Berlin). Half way home they met, this was the only place where the two posters silently hung next to each other.

The project turned out to be a big success and can be seen in full on de Immer wieder klebe klub site. All actual posters can be seen together in Berlin at Café Mockba during Urban Drift from 9th to 13th October. 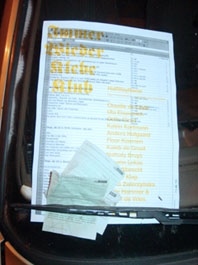 Already their next project is on its way, this one striving for taller buildings in Amsterdam, thinking big sure needs to be stimulated there. A series of posters will be made depicting and celebrating the Fernsehturm, the tallest TV tower of East-Berlin. The posters are bound to pop up somewhere in Amsterdam during the next few months. From now on whenever anything is being fly-postered by Club Plak their logo will be present as to spread the word and make name. So keep your eyes open and beware of Club Plak’s next big thing!