Five artists, who share the same basic idea of habitability, architecture, design, entertainment and reflection, lead us into their Fuzzy world. To demonstrate that art can be action, that it can establish a dialogue among disciplines and attain to a deeper awareness of context. 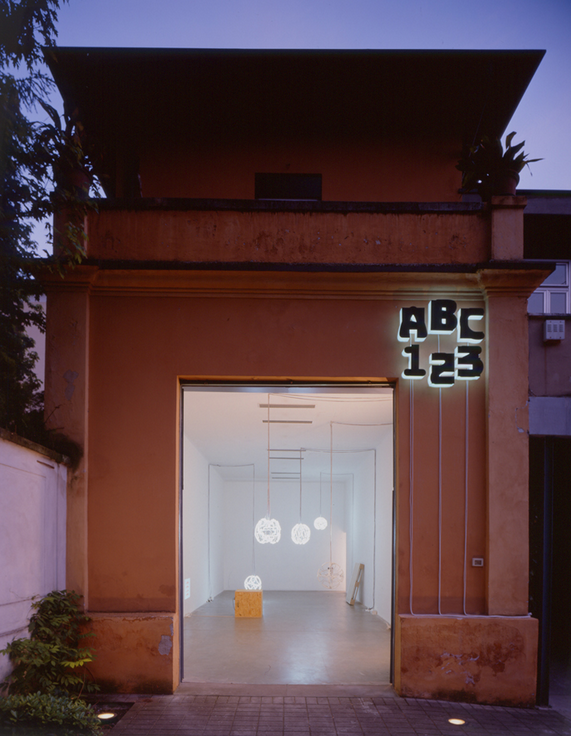 ABC, 123 is a neon sign written in bright letters and placed high up on the outer wall of the Massimo Minimi gallery in Brescia. It has the symbolic value of a doormat with the world Welcome written on it. Welcome to the Fuzzy world, a group show curated by Luca Cerizza.

The writing is a work by Mathieu Mercier, composed of the superimposition of two graphic styles: the rigorous one cultivated by Theo van Doesburg (the artist and theorist of De Stijl), and the free, soft and sensual style of the 1970s developed by Ed Bemguiat. It is simply an aesthetic blend – in other cases improbable – of two very distant cultural periods. Continuing along these lines: “The outer man turns to the eye, the inner man to the ear”, said Wagner.

Thus whilst the eye projects us outwards, the ear is a more inward canal towards a further fusion: between the city’s landscape of sound and the electronic music of the BHF duet, a DJ-set located in the gallery courtyard. The fusion in this case is between a sort of urban “sonography” over which we have no control at all, and the signals, the sound imprints and colourings of electronics.

The sound architecture also envelops the gallery space, which has the imprint of a set in preparation: with ornamental cloths draped against the walls, lamps at different heights, sliding walls, intermittent lights… Nothing, however, is approximate or left to chance. The visual reference is to a photographic set for a magazine preparing a feature on the latest cold Scandinavian interior design. 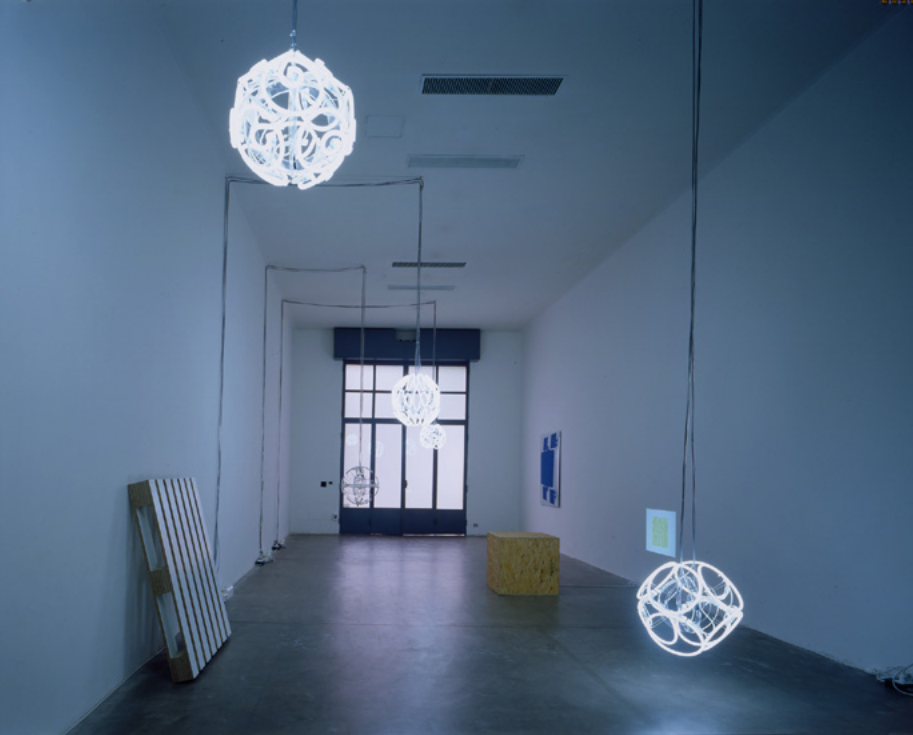 This is the first approach to the exhibition. The gallery is occupied by five younger generation artists, who are joined by what the curator defines as “the synthesis of an idea of habitability, architecture, design, entertainment and reflection”: Jeppe Hein (Denmark, 1974), Deborah Ligorio (Italy, 1972), Govinda Mens (The Netherlands, 1976), Mathieu Mercier (France, 1970), and Riccardo Previdi (Italy, 1974). Here are five worthy representatives of the current transversality in contemporary art, which, by utilising diverse media (sculpture, video, installation, sound, light) and stimulated by an eclecticism that rubs out borders, merges with communication, architecture and design.

But the Fuzzy atmosphere is in this case meant chiefly as the presentation of a suggestion, the realisation of a mental space. It is a space based on an open design and interpretative condition, and hence still flexible, in constant movement. It is a living organism, related to the dynamics, reactions and stresses felt by those living in it.