For me the first area, majoring on arcade classics, was a nostalgia trip. Seeing all this stuff and being able to play it all again blasted me back in time bringing up emotions and feelings about my personal past that I hadn’t remembered in years. I expected something like that but was amazed at the power that these things have to force recall of times past. It was like walking into a room of old friends, very Proustian. I was a kid again, (look there’s Galaxians!), easily distracted, (and Pong!), running around from machine to machine like a half-crazed Pac Man dodging asteroids, avoiding mutants, and generally having a great time. What can I say, it’s total therapy. I’d had a really difficult day but 10 minutes later I was totally absorbed in the unpretentious mechanics and graphics of pure 8-bit gameplay. There’s a real magic about some of this early stuff, invented before the industry rules and ideas had solidified into the large corporate structures we know today.

The next section deals with the emergence of the major players in the console market, it’s fascinating to see the historical development of computers being used simply as toys when only decades before they had been the exclusive preserve of an elite group of academics and scientists. Sure, the games are simplistic and the graphics nave and technically limited but that’s not the point, the best examples of the early days were, and are still, fun to play.

In other areas of the gallery there are exhibits that deal with some of the many other features and special characteristics of the gaming industry like marketing, genres, character design, audio design, industry heroes. It also examines USA and Japanese games cultures highlighting differences but also finding the common ground that make gaming such a meta-cultural phenomena. In the upstairs levels the exhibition turns to ideas of future developments, multiplayer gaming, internet gaming and new releases that define the state of the art. 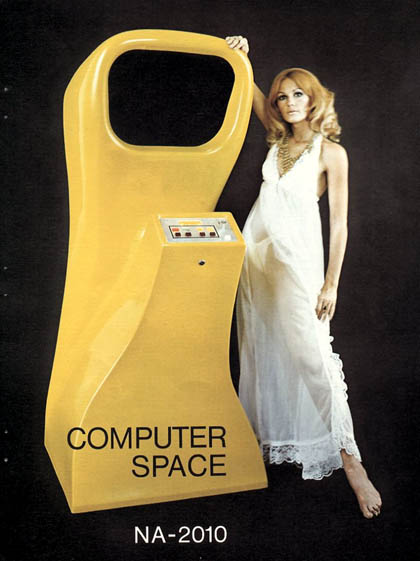 Everywhere there are games to play, the emphasis is completely on a hand-on experience of culture, go on a quiet night and you can indulge yourself completely flitting from area to area playing something 30 years old one minute and something brand new the next. In that respect it’s fantastic, you begin to see the historical and technical relationship between games like Super Monkey Ball, Sonic the Hedgehog and earlier experiments in innovative interfaces and genre defying concepts. You can observe the development of Nintendo‘s character branding as well as gain insights into the careers of luminaries like Shigeru Miyamoto.

As with any exhibition that tries to be this comprehensive there is always a feeling that the main players have often been included at the expense of other less well-known landmarks of digital gaming culture. Although it’s such a dynamic industry that the space could be ten times bigger and you’d still have to miss things out. I particularly felt that the UK coding scene of the early 80’s was really obviously neglected and it would have been nice to have a section that focused on UK developers as well as the USA and Japanese ones. I don’t think I will ever forget Matthew Smiths “Manic Miner” on the Spectrum. The frustration, that tune, the Python-esque humour.

Overall, it’s a great review of a new cultural phenomenon that has burst into all our lives. It’s exciting, involving, and not at all stuffy. I guarantee that if you go you will find one game that captivates you or drags you back to your childhood. The weirdest thing of all was stepping up to something and remembering all the moves and timings despite not having played for decades, these games sure do work on you.

The next installation for this traveling exhibition is in Tokyo later this year, it deserves to be a great success in one of the games culture’s spiritual homelands.