The dividing line between cellphones and computers is becoming increasingly indistinct with the two instruments now tending to converge in a single device. In the near future, with the arrival of third generation cellphones using UMTS, this tendency is destined to be accentuated, resulting in devices with characteristics which are as yet uncertain and somewhat difficult to identify. 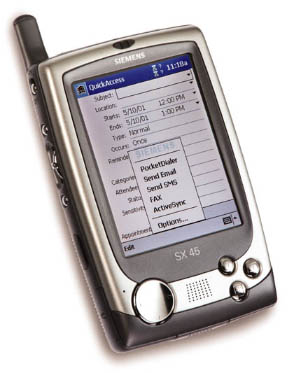 An economic game of vast dimensions is being played out with third generation cellphones (3g). The expectations of the public are increasing with regards to UMTS, which has been launched – too early for the effective availability of the products – as the real “wireless multimedia” with the notion of a cellphone equipped with audio and video facilities as well as of course the possibility to surf the net and receive emails. Over the years the functions of this product (always virtual, prototypes have been seen only in a number of IT and telecommunications fairs) have increased out of all proportion, to the rhythm of the technological innovation that is making it possible. And so expectations built up, along with the hype or rather the excessive emphasis on technology without putting it into practice. Then suddenly it all went quiet, so much so that last summer the Financial Times was asking “Where are the handsets?” and some months later Businessweek called the 3g handsets “The most complex consumer electronic devices never designed” as it highlighted the delay in the appearance of these products. It is almost impossible to talk about the characteristics of the real third generation devices with the main production companies. The stakes are so high that as far as projects and timing are concerned, a strong reserve is maintained. The only exception is Motorola, who have already presented their first UMTS model, available later this year, the A820 is equipped with a MP3 reader and optional video camera. The US company evidently wants to sound out the market with a product directed at applications linked to entertainment. The other cellphone giants instead concentrate on the standard GPRS, which should be a phase of transition towards a real wireless multimedia. The difficulties in defining this handset also lie in the fact that it is an instrument into which are potentially concentrated a series of “extreme” innovations which IT research has been working on for some years. The PC palm-cellphone of the future has to host a high density of innovations and at the same time be easy to use, familiar. For example? MIT‘s futures research on “wearable” computers – IT instruments which can be worn like clothes or jewellery – has been put into practice in the cellphone prototypes proposed by Motorola, Alcatel and Siemens, who in the recent CeBIT presented a “pendant phone”, a telephone to be worn around the neck. Studies of “Affective computing” which surveys our body signals and responds accordingly have also influenced the models of the American company whilst virtual reality technology for viewing inside increasingly lightweight helmets or goggles is present in some models put forward by Alcatel, to separate the handset from the screen and facilitate the use of moving images. A subsequent step, experimented in Japan at the University of Keio, is “augmented reality” information which helps to decipher reality, technology of this kind could be used for example for localised services, based on the geographical position of the user, considered one of the “killer applications” which could take off in the 3g market.