1. It is beautiful.
2. You turned my tv screen from a window into a remarkably accurate synesthetic canvas.
3. Any DVD with a seizure warning has got to be good.

Foucault would advise, “Never shoot a pistol that weighs less than the bullet.” (particularly in a vacuum!) Fortunately your DVD ignores such advice. Its soundtrack/bullet is simply too heavy for the visual pistol that ostensibly propels it, and the crack backfiring result is an audio-driven analog glitchfest of laughing/intricate spark: rare spy-cam/dressing-room footage of The Ghost In The Machine trying on a rayon Devo tank top, her bare electronic midriff glittering forbiddenly in all its (heretofore) undocumented glory.

You are truly the spirit of Paul Klee reembodied in a hand-held Coleco football game that’s just started to malfunction right before its 9V battery dies – multiplied by an exponential equation whose parameters I’m not yet at liberty to divulge. Bear down on the splaying profundity, and marvelous things will happen. – Curt Cloninger 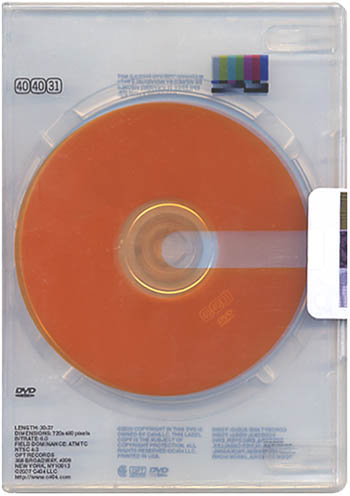 Yoshi Sodeoka. It is not too much to say that he has been keeping an important position in web world. It was 1989 when he went to USA on his own at the age of 20. Since that time he has established his original style. You can see what he has been absorbing in NY in this DVD.

After finishing the study of graphic design at PRATT Institute, he participated in making CD-ROMs for Interactive MTV and took charge in the legendary e-zine Word.Com, which is no longer available now, as an art director. And now, he is working at the experimental studio “C404” with David Opp from Day-Dream and Eric Roseverar from E13.

As he said “music is pretty much my side project. It’s pretty good that I control all the elements of the music. This is one of the things that I just have to do and enjoy”, he used to create the experimental interactive works with music as a core activity. The ways of expressing himself have increased as time goes by. From print to CDs, to webs… The development of DVD gave him the best place where his music and images can coexist and this DVD shows C404 as it is.

There is a word “Electronica”. This word implies the genre is with the sound and the way of expression, which have not been recognised before. This is a music that must symbolise this time. His own music and image world have been expanding through the Electronica. This is the first DVD as an image work that synchronise the electronic images with music.

It is now the 21st century. We are living in minimal spaces surrounded by modern interiors. However, we are still watching the usual TV contents through a wall-hung TV…. Is it really alright? The images from this DVD are pretty suitable for these stylish spaces from now on. Please do experience it.