Comics in France are part of popular culture. However the habits in comic consumption are rather rigid as classic color hardback albums still rule on the French bookshops shelves. In the 90s, the manga tsunami and US comics swell broke in Europe. This upheaval opened new horizons for authors and readers, then it helped the emerging of new forms of comics during the last few years. 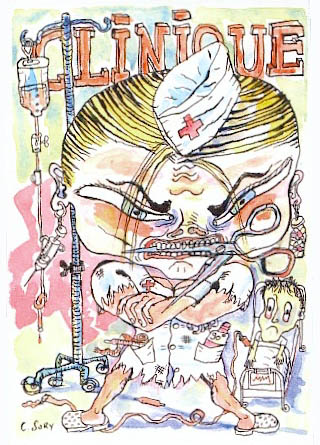 1st New Comic Festival was held in Valence, in a high school closed during holidays. It was the first festival dedicated to independent comics here. The atmosphere was relaxed, in a decor that seemed improvised. We could see exhibitions of original works, talk to authors and publishers, and make an incredible amount of shopping as we could find a collection of rare books.

Usually to get them you have to stroll for hours on the net, get informed in independent music and comics magazines, and order from different places. Today all was there and we could touch.

I’ve appreciated the serigraphied magazine “Stomack”. It’s a production limited to 100 copies. The serigrapher gathers illustrations and comics from various drawers, and uses them as a material, arranging them to compose as he likes the whole magazine, trash experimentation mixing serigraphy and lithography, on different papers, with various inks so you can feel their textures. This comes to an extremely rich and compact result. 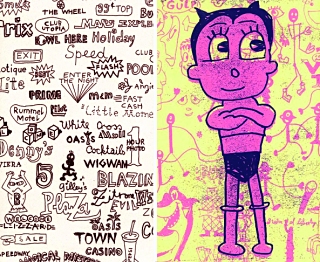 Another stand very interesting though better-known: the label “Le Dernier Cri“. Their productions are raging and psychedelic, full of thick and vibrant colors. Caroline Sury explains the situation of their atelier. “We left our atelier in Paris because we had not much money and we wanted to do nothing else than what we wanted to do. Now we are set up in Marseille in a squat, with other associations.” They are really productive.