At Castello di Rivoli, curator and gallery owner Jeffrey Deitch has put together the exhibition “Form Follows Fiction“. Twenty international artists give body and voice to aesthetic worlds in which it is no longer possible to distinguish between truth and fiction.

In 1992 Jeffrey Deitch organised “Post Human”, also at Castello di Rivoli. The exhibition, which explored the confines of the human condition, unexpectedly became emblematic of art at the end of the century and formed the basis for that which has been defined as the post-human aesthetic, coining a neologism. In October the American curator has returned to Rivoli with “Form Follows Fiction”, the project, which ideally follows on from the 1992 exhibition, represents the new concept of reality developed by artists active during the mid nineties.

The CIA, after the attack on the Twin Towers, has decided to pay science fiction writers to bear out the most visionary screenplays. The world does not want to be surprised anymore and to achieve this turns the relationship upside down: starting first with fiction in order to then arrive at reality. What to some cynics, or confused minds, appeared to be the most costly Hollywood set ever made, is just the latest example of this incredible mix of real and artificial. Even Deitch delayed printing the catalogue in order to mention the event. The exhibition, in its strange context, an enormous corridor that does not allow much autonomy to the artists, is however both impeccable and beautiful.

The spectacularisation of the real and the increasingly blurred confine between reality and fiction are well documented in the exhibition catalogue, a brilliant instrument, as was the catalogue of Post-human, created together with the lamented and talented artist/designer Dan Friedman. 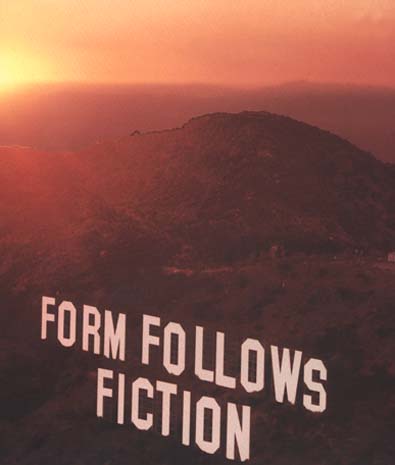 The cover carries the words “Form Follows Fiction”, in the style of the Hollywood sign on the hills of Los Angeles, immediately inferring the double game of the fiction, it shows the work of Maurizio Cattelan for the latest Venice Biennale, the American sign reproduced full scale on a dump on a hillside near Palermo.