There are two diseases that many designers nowadays are haunted with: the “cool” and the “how.” The reason why they are troubled by those diseases is that their brain system lacks the “what.” Designers are so concerned with making things look “cool” and are so obsessed with “how” to do those cools things that they forget “what” they are trying to say, if they have anything to say at all.

Most of young designers today don’t probably know of a designer named Bob Gill who has something to say. They wouldn’t even know that he co-founded one of the world’s most influential design company called Pentagram.

Since the desktop revolution in the late 80’s, the design process became much more accessible to people, including non-designers. As long as you have a computer and Photoshop, you could claim yourself as a designer. “The mystique has finally gone out of ordinary design,” says Bob Gill in the introduction of his newly published book “Unspecial Effects for
Graphic Designers.. “If a typist can do much of the work previously done by well paid specialists, what’s left for the designer? Designers have to do things that a typist with a computer can’t do.”

Well, what a typist with a computer can do is make things look sort of cool by imitating what’s hot and trendy. He even can find out how to do those cool tricks. It becomes a repeated cycle of “how” to make things look “cool.”

What a typist with a computer cannot do is to come up with something to say. That is precisely the problem many designers have because they don’t have anything to say. Gill advises: “Research the subject as if you know nothing about it. And don’t stop until you have something interesting, or even better, something original to say. That’s the most likely way of producing an original image.”

What’s interesting about Bob Gill’s work is that you can’t tell if thework was designed 30 years ago or a month ago. That’s because he’s concerned with “what” his design communicates rather than if his design is “cool” or how his design is done. In his book, Gill shares his theory of coming up with an interesting statement first before thinking visually. In his work, this thought-driven approach is made visible. 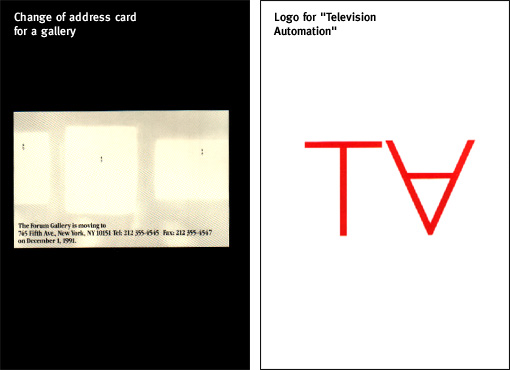 For a card he designed for a gallery moving to a new location, he used a photograph of a discolored wall with hooks, creating a mental image and narrative in the receiver’s mind of pictures that have been moved. Another one of many clever designs is a logo he designed for “Television Automation.” The logo reads as “TA” and “TV” simultaneously. Gill so successfully distills the problem down to its purest form and finds a direct yet witty solution.

According to him, what’s more exciting than the most amazing special effects is something that you can say to your audience “look! Have you ever noticed this before? Even though it was right under your nose?”