What’s next when the game is over? Do the robots sleep? Are the pixels lost? Will the circuit boards calm down?

I had my chance to find it out at gallery Hinterconti at an exhibition on game over realism and the quantity-instead-of-quality subject. In the front-room there was a dj playing and the walls were decorated with old joysticks and current transformers hanging from the wall. On a mirror there was written "I hate you for playing games with me! Game over! -Chantalle"

In the backroom there were some plastic-robots trapped in a huge bird-cage. They were turned on and as they struggled with their legs and tried to spin thier bodies it seemed as if they were trying to break free. Another robot was fighting against an evil amount of data-tape on the floor. This was done by Soenke Held. 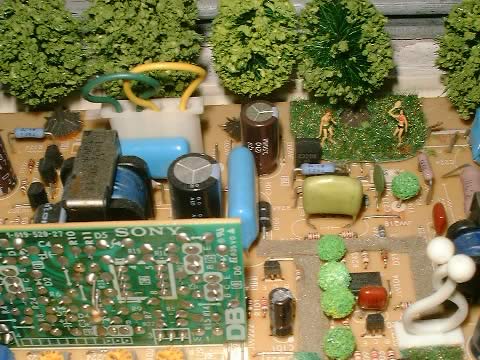 There were also some circuit boards where Angie arranged trees, streets, cars and small people inbetween the condensers, chips, resistors and conductor paths. It is really interesting to see how similar the structure/ architecture of circuit boards and cities are. Everything is planned out very well on rectangular pathways!

The main part of the exhibition was the work of Norbert Bayer, who uses “Ministeck“. Ministeck is a child-game which was very popular in the 70ies and 80ies in germany (and maybe all over the world?). You have lots of small coloured pieces shaped like the blocks in Tetris and a plate with a grid. There you can stick the pieces to images. Norbert Bayer discovered, that ministeck is very suitable for reproducing pixel-based game-screens. His "TouchScreens" reach from “Boulder Dash” to “Pacman”

"Analog Eats Digital" is the name of a cd Norbert produces. Every copy has its own small Ministeck-original and on the cd there are 5 Ministeck-love songs by different artists. On the right you see Norberts cover-artwork for "Input64" a sampler that features c64 game-tunes.