Sarah Ciracì, lives in another world, her own. Never-ending desert landscapes, midnight sun, UFOs, dunes in tones of violet, spaceships and places in radioactive colours. They are artificial places little inhabited territories; perhaps visions of a possible future, perhaps imaginary scenes. Much loved sources are the books about UFOs and the classics of science fiction.

“My photographs do not really exist, they are metamorphoses of a condition of the mind”. 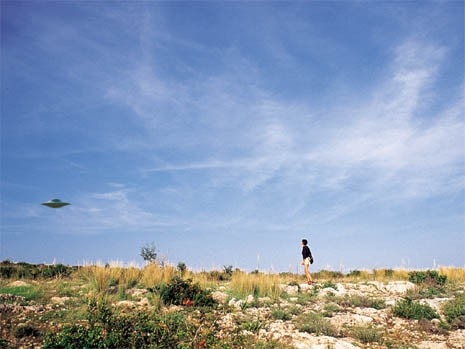 Sarah Ciracì, I Wasn’t Particularly Astonished to See Them on the Horizon, But I would’ve Never Imagined They Would Land and Talk to Me About Their Planet, 1995, 3 Iris print 34×26 cm

At the end of the second millennium there were important transformations in art. A more human and subjective approach has made it such that autobiographical lacerations and private unrest have taken the place of the ideological, favouring the world of the feminine.

The last ten years have in fact seen a clear increase in women artists. Adding also the use of technological means which since the sixties up until the present has transformed the idea of the relationship between technology and art. From an initial use of technology as a specific physical instrument, the television monitors, cameras and telephones in the work of the sixties, in the seventies we passed to experimentation in black and white as a moment of reflection on the role of progress, up until the use of technology in communication during the rich decade of the eighties.

Today artists are from a generation grown up with everyday technology: with internet, TV, video clips and advertising. It is that which has been defined the ‘hypertrophy’ of the image which has brought us to the extreme discovery of the technology: virtuality.

Theses on virtuality, the maximum expression of technology, are discordant: on the one hand it meets an atavistic human need to dream and imagine, on the other its pretext to substitute reality seems to suggest a weakening in the human capacity to dream that which is not there; the push of progress is transformed into immobility. This is the fear which Jean Baudrillard makes us think of.

Sarah Ciraci has perhaps found a way round it: if technological progress is taking possession of our reality, there is nothing else to do other than leave it and take refuge in another world. Today Sarah lives with UFOs, with Marcel Duchamp – who according to her is an alien – with space shuttles and osmotic rooms.

“It seems that if we were able to work on our space-time perceptions and enlarge as such our codes of perception perhaps we could make visible spaceships and aliens. You therefore see them or imagine them?”

“I saw them in 1995 and documented the sighting with a piece of work. It has never particularly surprised me to see them appear on the horizon but I would never have imagined that they would have landed to talk to me about their planet. And only since then that I have a new horizon of perspective.”