Luisa Lambri is one of Italy’s best known artists. Born at Cant (Como) in 1969, she lives and works in Berlin and Milan. She was awarded the “Leone d’Oro” at the last Biennale in Venice.

Her work consists in photographing or filming places: constructions of volumes, lights and transparencies. We are unable to identify them but this does not seem important; they resemble each other, they become mixed up and the light makes them unreal. 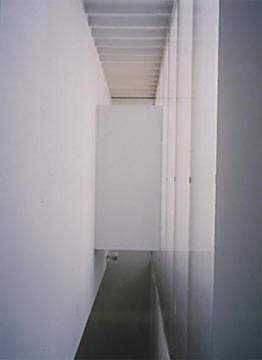 These are anonymous interiors seemingly not intended for socialising, but existing only to be crossed by the gaze.

Then the surprise emerges from between the lines, like notes in the margin, when speaking to Luisa Lambri: the pictures are of buildings that are the symbols of modernity. Her camera has travelled to India, Finland, the Czech Republic, Italy and Japan to converse with the historic fathers of the architectural Idea.

The last decade has been marked by female art, with public recognition of the few already active artists and a rising surge of mature “female artists” speaking autonomous languages. After the decade of the Eighties during which the artist was the suffering hero of ideological gestures has come a new vision of art, constructed by a more intimate and subdued voice that is naturally more feminine.

Luisa Lambri sees the photographing of architecture merely as a pretext to speak about herself; in this she strays from the tradition of architectural photography and in particular from the trend of German realist photography dating from the 60s to the present day represented by the D”sseldorf school, the photography academy directed by Bernd and Hilda Becher, attended by Andreas Gursky, Thomas Ruff and Thomas Struth among others. The centrality of the architecture, the elimination of technical expedients, a strictly realist intent and an objective shot make up their way of showing the tensions hidden beneath apparent uniformity.

Luisa Lambri constructs an international map of relations; she traces co-ordinates. She draws parallels between herself and the world and, in a “reportage” of places with no identity, strives to rediscover just her house and herself.

Luisa Lambri’s artistic story started with a 1920 magazine of Le Corbusier: “L’Esprit Nouveau”. She was struck by the relationship that Le Corbusier created between the possible and the impossible, almost anticipating the dynamics of virtuality. Architecture has a physical limit but Le Corbusier intervened on the images of his constructions to overcome this. He no longer had links with the actual or the physical. Architecture became an Idea, a mental space.

She does not produce a work on architecture nor does she pretend to. She starts from architecture in order to rediscover what Roland Barthes defined with a Latin word “punctum”; a fate present in photography: “a sort of subtle out of range shot, as if the image were projecting the desire beyond what it showed”. (“La Chambre Claire”, Einaudi, Turin, 1980).