Today it’s hard to talk about the contemporary art of the world without the artists and movements of the Chinese mainland. While the Western and Japanese art journals keep watching the large cities around the capital Beijing, many artists are in the process of moving to Yunnan near the border to Burma/Laos. It is said that there’s another life style that cannot be realized in Beijing, New York and Paris. We interviewed Tibetan organizer Neeman who created a new life sphere for artists, to know the reason why those artists in the mainland love Yunnan. 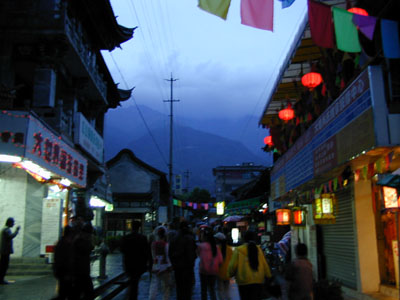 The Han Chinese likened Yunnan to the place beyond the clouds. Take an airplane from Bangkok for about one hour to Kunming, the capital of Yunnan, the nearest large city to Southeast Asia. Then make a connection with a domestic line for thirty minutes to Dali. Dali used to be the capital of a different nation where non-Han lived hundreds of years ago. Yunnan is near a huge lake that used to be called an ocean by the nations of the old kingdom and a perpetually snow covered mountain stretching to the faraway Himalayas. Yunnan is home to 30 different minority races, while the mainland has 50. They live their everyday lives inside of the ancient castles.

After a one hour trip by bus from the airport in which people with differing clothes joined me, I finally arrived at the castle town. The ancient castle Dali. The long-established stone-built houses line the street. Different races such as the White tribe fill the street. The landscape with snow mountains behind is called the Kathmandu of China by backpackers and has fascinated many travelers since it was opened to foreigners 15 years ago. Then cafes, lounges and guesthouses were opened by the long-term guests and the local youth and galleries sprung up filled with artists from all parts of China.

Then this year an epoch-making art project and workshop entitled “…BETWEEN…” was held in this city.

Why do those artists go to Yunnan in the mountains from Peking, Shanghai, Paris and New York?

We spoke to Neeman who is an organizer. He provides work spaces for artists and acts as a local host at this art project to know the reason.

Why are the Chinese artists moving to Dali?

In recent years, a growing number of artists are getting tired of staying in Beijing, Shanghai, New York or Paris after being invited by galleries.

In Bejing, you’ll be making good if you’re put in the art world, otherwise you should go into too much performance or activism. And in Shanghai, you need to think of more commercial success. Anyway, these cities are expensive places to live in and it’s hard to live your life, to say nothing of doing your expression, without doing something impressive or belonging to some company or organization. 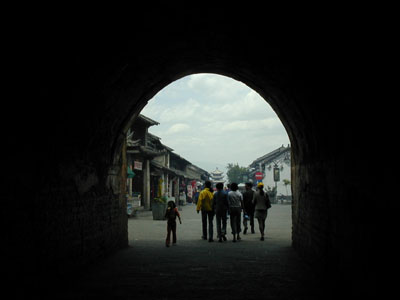 Going abroad to a place like New York or Paris sounds gorgeous and profitable. Some people are making money with their work, but on the other hand, there are some people who wear out their mind and body to maintain the relationship with galleries or their positions as artists.

Then they naturally turn their eyes toward Dali where the weather is fine, everything is inexpensive and easy to live with different cultures far from the center. It’s an inspiring space to devote themselves to their creation as artists. 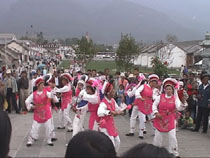 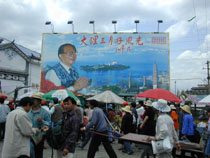 About 15 years ago, this area became open to foreigners and many travelers came to visit here. As a result, many people have experienced the expression by the minority race’s culture and art we have (Neeman is the Tibetan and his wife Xiao Ming is of the White tribe, both of them are contemporary artists), and now we are being able to develop our own culture by ourselves. Then we opened a gallery in this city about 10 years ago and it allowed independent artists to work actively. On the other hand, Chinese can make trips as they want in recent years, artists who left the center to look for an appropriate space to express themselves are visiting this city. 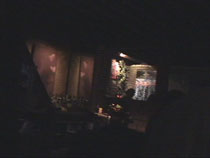 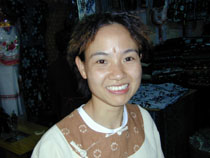 It was a kind of meaningless since the young who felt a deprivation in the center just headed for there to get something. People coming here now are moving themselves having more realistic way of thinking that there are more possibilities to be an artist itself.

There’s a gallery where they can sell their works to foreigners and situations where the information starts connecting to the world. They can take part in what we’ve done, or open a cafe or lounge by themselves. Of course, incomes from selling products or working in this city should be small compared with Bejing, New York or Paris, but it’s more attractive to be able to work in such a place with care as they like. With the Internet, the distance from the center is not a big problem today. 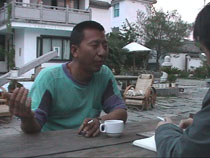 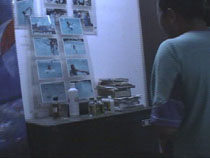 What kind of project is “…BETWEEN…”?

This project invites the world’s notable three artists, Fan Lijun (invited to the last year’s Venice Biennale), Yue Mingjun (also invited to Venice Biennale, done the opening poster of Fukuoka Asian Art Museum) and Ye Yongqing to Dali and they develop workshop and creation living in the old houses in Dali. It’s interesting to see what kind of works and communications come about in this unique place different from both the ordinary Chinese society and Western culture.

This is an entirely independent project organized by Dali Mei Gong River Center of Art and Culture I organize, in cooperation with Kunming Up River Club and Chengdu Up River Art Museum.