How befitting a name chosen by the group of artists/programmers (and programmers/artists) that embrace a fundamental belief: the writing of the code source; to be precise the text that prepares and programmes the execution of a virus, is to be considered as an aesthetic product. Therefore viewing the virus as an absolutely original vanguard, a revolutionary and an innovation carrier, whether for generation of new linguistic, psychological and communicational models, or strictly for the more aesthetic one. 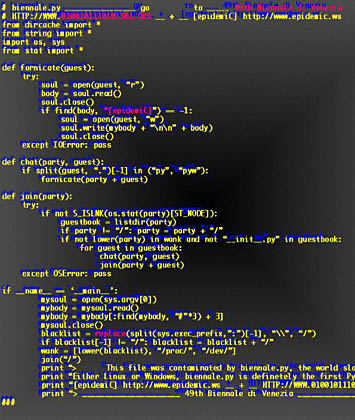 These introductory statements have already produced two results, the exhibition ‘virii virus viren viry’ (at the d-i-n-a of Bologna 24th May) and the ‘biennale.py’ project, produced in collaboration with 0100101110101101.org for the Biennial of Venice. The source code of the virus has been made public and spread on the opening day of the Biennale, June 6th 2001, from the Slovenian Pavilion (with de-installation instructions attached to the virus). To spread the virus further, during the opening days of the Biennale thousands of T-shirts printed with the source code of the programme will be handed out. Provocation to the nth degree. The most unprejudiced will be able to buy the computer virus, indeed making an off the wall economic investment. The event gave us the opportunity to talk with the protagonists on the products, their projects and art.

On your website, you refuse to define yourselves but what is EpidemiC and was it born in the digital world?

In short, the point is that we do not define ourselves. The fundamental reason being that we are wary of categorisation, cataloguing and the act of name-giving as is clearly present in the IT world (this is a hacker, this is a programmer… etc.) as also, and maybe even to a higher degree, in the world of art. EpidemiC prefers to define itself as a group – more in the classic sense than the collective, and knows the old movement only too well. It is made up of someone working in art, practising and reasoning from a theoretical point of view, and someone working in IT, similarly practising and reasoning from a theoretical point of view. One day, someone from the former group began asking questions to someone from the latter “and this unfortunate individual replied”. The rest is history. But let us not forget that by now Donald Knuth’s book ‘The Art of Programming’ is history and that Steven Levy in ‘Hackers’ (first released in 1984, the start of viruses) talks of conjunction between “Art, Science and Play”…

From ‘virii virus viren viry’ to ‘biennale.py’, what was the artistic route from project to project?

‘Virii virus viren viry’ is a sort of out of context virus, with contextualisation on a perspective aesthetic plane: we believe that it can be read as in the sense of shortcircuit creator/created, code/monster, function/play…, more than just being read, as done by Bifo, in the same way Schwitters executed the Ursonate. It is a behaviour that is intended as a point of view of an eidetic thought from the code, not showing results on the screen, which is another thing altogether. ‘Biennale.py’ is the first virus written for Python, therefore with intelligent IT, it is a reasoning of the piece ‘Merda d’artista’ (Artist’s shit) by Piero Manzoni: you can think about it, but not do much else. Both the proclaimed confine you a destructive action in order to certify their existence.

How was the project created and developed?

The project is to understand, by doing. As has always been art and computer science.

Why also spread the virus through humans, taking it off the net?

The virus is not taken off the net; in the real world there are its societal shadows and its news. Necessary but by no means fundamental.

Is investing in viruses a provocation, ironic or a paradox?

Investing more than anything a great amount of intellectual energy in viruses, we like to do a lot. Arthur Cravan and Francis Picabia would have been appreciative. As Madame du Deffand to Voltaire wrote, the real enemy is boredom, to not have anything to surprise oneself.

Why say a virus is beautiful? It is art but which – digital art, new media art, net art? ( often used synonyms)

We can’t maintain that this is art. However, we can affirm that in the “platea of humanity”, a lot has died, and doesn’t even know it.