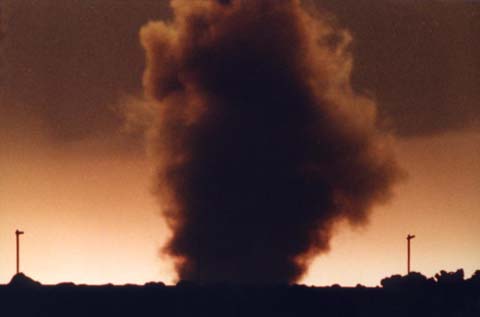 In early May, Budapest’s Vintage Gallery (a specialist centre for photographic shows) hosted an exhibition by a Hungarian photographer who has a curious view of nature. Dezso Szabo has gone a lot further than other artists in including natural forces within the frame of the picture, and he does it without gluing blades of grass to the prints.

Except they are not shots from the Oklahoman Twister Corridor – or in fact from anywhere in the US. Dezso makes the tornados in his kitchen in Budapest. Using a tank of water, he creates a whirlpool and puts in ink so as to create a tame twister that can be photographed. Even the little bits of countryside are tabletop models, the gallery explained.

In the early nineties he shot a series of photographs capturing clouds in the reflective water at the bottom of a steel bucket. (www.vintage.hu/szabo/earlye.htm) Obviously not ‘captured’ enough for his liking.

Spiral storms like tornados and hurricanes wield enormous force, yet last only minutes or hours – at least they only last that long on our planet. Astronomers believe the red ‘eye’ of Jupiter to be a huge, coloured spiral storm that has lasted for thousands of years in the gas giant’s thick, cold atmosphere. But how to pin down, or see better, these dynamic, swirling cones of whatever fluid?

Might Dezso turn another tide, reverse another current’s flow with his homemade vortices, and also find a research result in his kitchen? Five hundred years after art and science started to drift away from each other?