This month’s cover design was produced by James Widegren, head of THREE.OH in Sweden. As well as this month’s cover, you can see the beautiful opening Flash on his site. He is an up-and-coming creator working for various projects despite being only 19 years old. We interviewed him while working with Vir2L in Washington, DC. 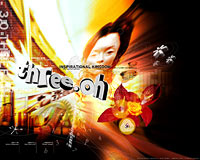 I’m James Widegren, 19 years old. I was born and raised in Sweden. I’m actually half Swedish half Philippino. I’m head and creator of THREE.OH – Inspirational Kingdom. Had my company Nisch back in Sweden but went to London to work for Razorfish as a freelance designer.

I’m trying to settle down for a while. Not sure where or when that will happen. Otherwise I mostly work. And I play some video games with my new roomie Jason from Vtwin Labs. 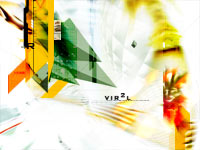 I’ve heard that you’re currently working with Vir2L in Washington, DC What kind of projects are you working for there?

Yes, I have been here for about 3 weeks and it’s cool. Got to work on the new Vir2L site which will launch soon. Watch out for some nice Flash and audio. The rest is classified but it’s definitely some really nice work.

Could you tell us more about THREE.OH? What kind of things are you doing there?

THREE.OH is my precious little baby on the net. I want it to be a high quality site that promotes and inspires the internet design scene.
I try my best but work is slowing it down right now.

The THREE.OH web site has been renewed and it has become totally different than before. What inspired you to renew the site?

Well, it was clear that I just had to renew it and give it a new look. I tried several different interfaces and was in the midst of finishing my second interface. But I realized it wasn’t functional and had to think of a new way. At that time I read a lot of fashion magazines, they made the impact to the third, clean design.

What are you targeting on THREE.OH web site? How do you think THREE.OH will look like in the future?

I definitely want it to be a daily resource for people. In the future, hmm… maybe THREE.OH will give Communication Arts an Annual Award or something hehe.