Maywa Denki landed at Galerie Du Jour Agnes b. from Japan. They’ve produced and released their original and unique ‘products’ (artworks), and have been working actively doing performances with those products, holding concerts with original music instruments and appearing on TV programs. 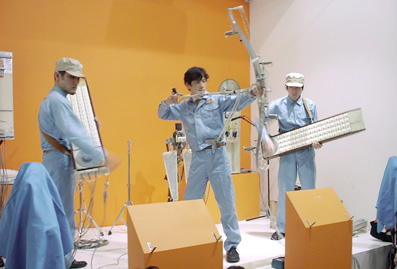 It’s not too much to say that Maywa Denki is now becoming a national artist (or an idol?) in Japan. It used to consist of two brothers – Masamichi Tosa (president) and Nobumichi Tosa (vice-president), but the president retired during their stay in Paris and the ex-vice-president was inaugurated as president.

Thus, the new president, a worker and an apprentice appeared on the stage. The place where their concert was held was crowded 20 minutes before the concert started. Some of the audience looked like an enthusiastic fans, having a catalogue in their hands.

When the president (who wore Pachi-Moku) switched it on and spread its wings, the hall was filled with laughter. After they performed a few tunes, they moved to the room next door with the last tune ‘Tsukuba Baribari Densetsu’. Then demonstrations with objects started. 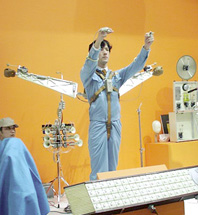 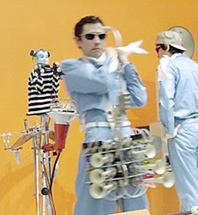 They demonstrated ‘Newton Gun’, where an apple inserted on the end of a gun ‘falls plop toward the center of the earth’ (new product), ‘Hou-Den-Na’ that passes a 100-volt electric current, and another new product ‘Machine Gun’. With the new product ‘Machine Gun’, they shot test tubes contain shampoo and cream bought at a drug store, and those liquids intersect each other inside the vinyl connects the gun and wall.

While they were shooting this gun, the vinyl (vinyl bag) expanded and the worker who was watching the demonstration in-between point sent him dangerous signals again and again, and then finally the demonstration finished halfway through. (Was it on purpose?)

Their next performance will be held at Selfridges, London from May 1st. For further information, check out their web site.