Hexstatic made their talents becomes widely known with ColdCut’s CD-ROM ‘Let Us Play’. Most of you may know them for their works included in Gasbook 6 &7. Their full album entitled ‘Rewind’ treated sound and vision as one and contains ‘Vector’ (included in Gasbook7) will be released from Ninja Tune.
We interviewed them about the new album and creative scene in London.

Please tell us about your recent activity.

We have just finished our debut audio visual album ‘Rewind’, and are starting to do a lot of gigs. We recently did the onedotzero festival at the ICA in London, which was great.
We are also currently touring with the British Council Sensurround tour which includes Halloween Society film club, Your Mum visuals crew, Audio Rom, Andrea Parker and the Off Centre Club night. We are off to Roskilde festival in Denmark with Ninja Tune next week. It’s all getting very busy.

The full album ‘Rewind’ contains ‘Vector’ which is included in Gasbook7 and will be released on CD-ROM and DVD in August. What kind of album is it?

It is heavily influenced by music, toys and games from our childhoods.

Hence, it has quite a strong electro influence. All the tracks are fully audio-visual and there is a video for each track. There are also some remix toys for some of the tracks. It is a very electronic album, but there is a strong dose of funk in all the tracks, and a couple of more funky hip hop style tracks such as ‘Ninja Tune’. It’s a big mix of things, basically because most of the tracks are based around a certain subject, e.g. games, technology, sex etc, and take their references from these and the video ideas.

Is there any differences in the works contained in the album between CD-ROM and DVD?

The DVD will be out at a later date, due to technical difficulties, so we hope to include some new work and ideas in the time it takes before it comes out.

What do you think about the possibility of DVD?

We think that DVD will be a great new medium, and hope to use it for all our VJing and live performances. Unfortunately, the technology is a bit slow in this country at the moment. Ideally we would like to use it like you would DJing with CD’s, but obviuosly the visuals would be included as well, which is great for our stuff, as it is fully synchronised sound and vision.
Together with video samplers, effects etc, this is what we are working on at the moment for live performance.

What do you think about the future of the visual music?

We believe it is the way forward. When DVD becomes more widespread and recordable there will be no need for just audio CD players. You may as well be watching the video at the same time, and obviously, the more synchronised it is, the more interesting it will be.

Where have you shown your works in London?

The onedotzero festival at the ICA have shown our stuff for the past two years, and we also performed both times. We have also shown stuff at Kentra, which is more of a film club.
The Futuresonic festival in Manchester recently showcased the whole album in video form. Cinefeel in London have also always showed our stuff, and they also showcased it at the recent reopening of the Pompidou centre in Paris. We have also had stuff shown at the Mirrorball festival and various other non-club events. 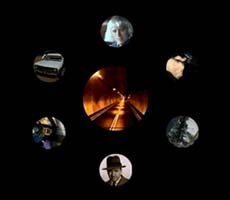 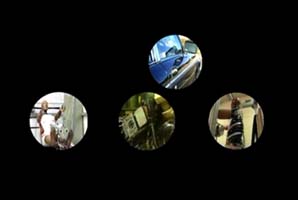 Is there any movements and matters you keep your eyes in London?

There are quite a lot of events like Halloween Society cropping up around London, which basically concentrate on film/video and music together. This is really interesting for us, since it is perfect for what we do, and also show the growing interest in audio-visual entertainment.

Both Stuart and Mark have been to Japan and both loved it. The club culture there seems to be more open to the experimental and visual side of clubs. There also seems to be a growing VJ culture in Japan which is very interesting. We are all fascinated by the technical side of Japan, and wish that Europe would catch up. We always hate waiting for the technologigal advances to filter through.

Are you going to go on a tour with the new album?

We aren’t really doing a set tour, but we are continuing to do gigs worldwide this year and next. We are hopefully coming to Japan in November, as part of a Ninja Tour over there. So we hope to see you soon !

Do you have any plans for the future?

We are hoping to get the DVD side of things going really strong, and to also develop our live show a lot more. We also want to start doing some more commercial work for television etc, since we need to earn some money !
We’d like to get into the Internet side of things more, as when it speeds up a bit, the possibilities for visuals and broadcasting over the web will be limitless.