When computers can think, what will they talk about? When they chat with us, and – more intriguingly – with each other?

Until 25 March, Budapest’s C3 gallery and cultural centre hosts a wonderfully atmospheric installation by three Hungarians about just this: robots chatting to each other. 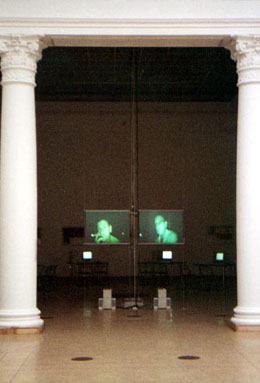 The designers of ‘Smalltalk‘ (Zoltan Szegedy-Maszak, Robert Langh, and Marton Fernezelyi) have set up two large screens next to each other, lit from behind by video projectors. As a visitor you enter the darkened room to find both screens facing you, with two green-tinted faces watching you expectantly from the darkness. Both are men in perhaps their late thirties or forties. Both are smoking (after all, this is Eastern Europe) and peering at you from their own darkened rooms. The way the video footage of them has been looped means that – apart from their cigarettes never getting any shorter – they look live – quietly, wearily present.

The effect is pleasingly uncanny. The two chatterbots are watching you and waiting – they want to be set chattering, and are patiently waiting, in their two smoky silences, for you to get them conversing.

From the ceiling on its cord hangs a single thing the size of a pocket calculator, dangling at about chest height. 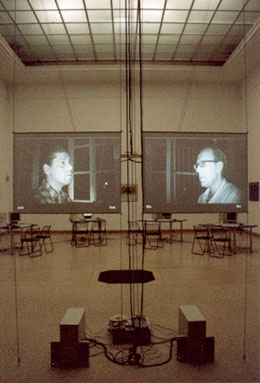 You, the visitor, tentatively approach this thing and look at it – it is a palm-held computer device with a glowing touch screen. It is encased between two sheets of perspex so that you can only touch the screen and not reach any of its buttons. There is a menu of nine conversation topics and with arrows you can move up and down the menu, or hit a topic.

And so you tap a topic, and the chatterbots start to chatter. The video screens switch to black and white as they start to talk aloud in English, with words appearing in Hungarian on the bottom left and English on the bottom right of each screen. The conversations certainly sound improvised and are different each time you touch on the same topic.