“People who continue explorations on the scene where attractive media technologies are created always have interesting ideas, and the technological demonstration itself created from the scene is becoming attractive today. Therefore, I think, the boundary between art and technology is becoming vague.”

Toshio Iwai, is an interesting media artist, who turned his attention to how the ideas behind the scene where technology is created. As a way to communicate the attraction of those ideas, he presented ‘Happy Technology Lab’, a collaboration project with the cartoonist BBKY, at a gallery in Harajyuku, Tokyo. 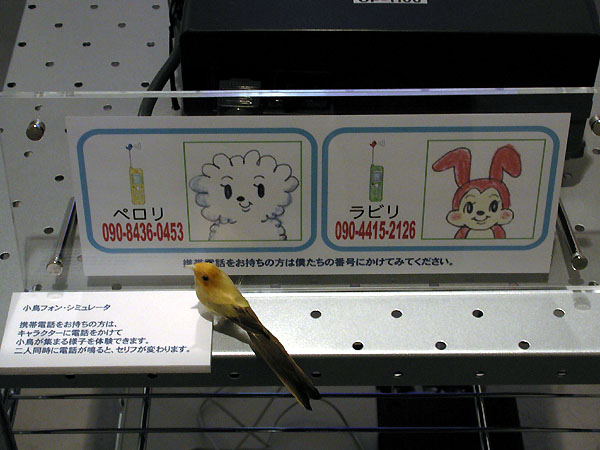 “When I approach a project to realize technologies with an idea as an artist, what would happen? With such an idea, I started to work for this exhibition in the same way as a laboratory of the latest technologies”, Iwai says.

There’s a disappointing fact that the fresh interest that researchers created in their creation will be chipped off when it becomes a consumer product, and as a result, end users have to create their originalities using such products. The background of this exhibition has an approach to make the fact happy with the power of art.

Let’s go see the works exhibited at the Lab. The first one is ‘Birdie Phone’. Today’s mobile phones have a function that uses various ringing tones. This ‘Birdie Phone’ is an attempt to recreate the sound of birdcalls using a mobile phone. Can a mobile phone be a tool that allows us to communicate with not only people but also animals (birds)? 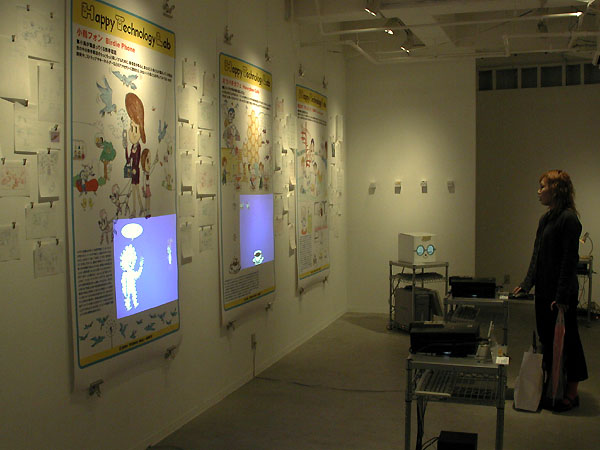 Visitors can actually ring the mobile phone that sounds a birdcall melody and a device is installed to simulate that it works. Panels hang on the wall that explain about each ‘prototype’. The format is the same as ordinary laboratories, but what a big difference the ideas and possibilities visualized by the cute illustrations of BBKY make. Connections leading to the prototype are also illustrated by BBKY and they surround the panels. Those cute and lovely illustrations of BBKY attract visitors’ eyes. 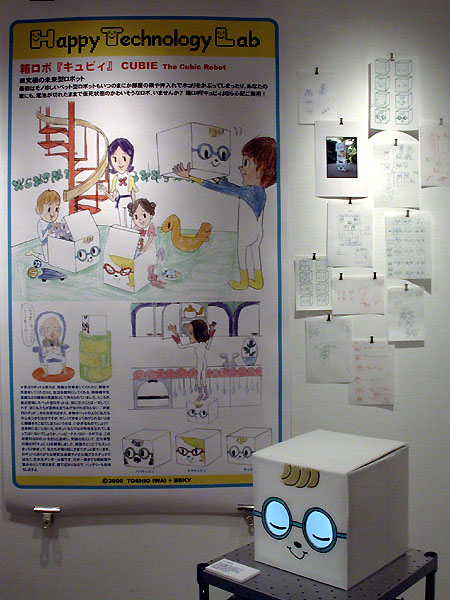 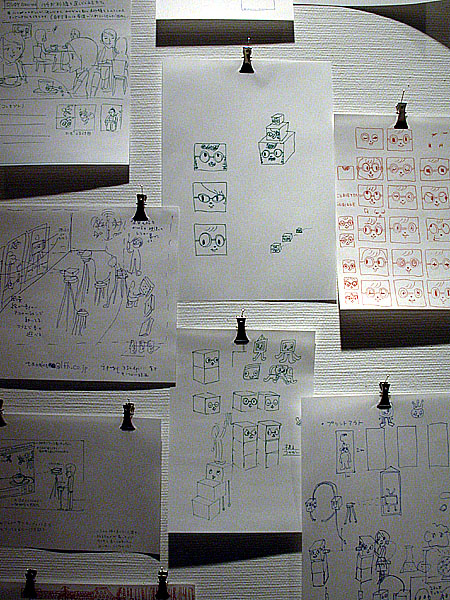 The next one is a box with drowsy eyes. The cubit robot ‘Cubie’. Today we have not only working robots but also other ‘pet’ robots. The idea of this ‘Cubie’ came from an irony that those pet robots could be the same as ordinary toys and they would be covered with dust. It’s box shaped and you don’t have to put it back on another box. Basically, it’s ‘sleeping’ and you only have to ‘wake it up’ when you want to play with it to save energy. Also, it’s nature-friendly as the box is made from paper.

Next to Cubie, a small device resembling a mini-disc player and a headphone are put on a table. Visitors are guided to put the headphone on their head and light the player with three installed desk lamps. Following the guide, sounds are heard through the headphone. Lighting the player from different angles, creates music. This is an audio lens that makes sound reacting to lights. “It’s really interesting to be in a night train with this device as it makes different sounds and shapes”, Iwai says. “It’s a magic player using the street lights as a source, without tapes and MDs”. 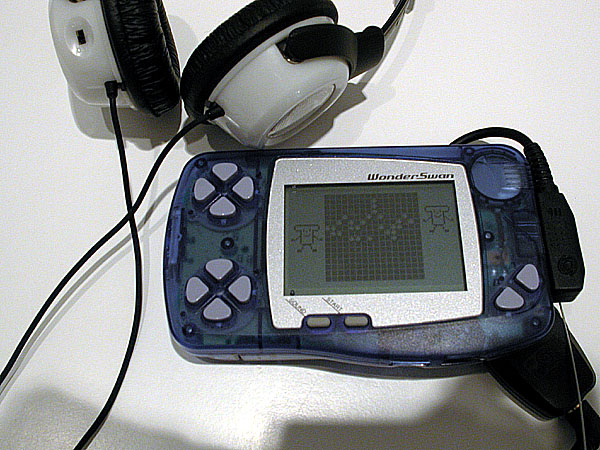 On another wall is installed a number of WonderSwan, a portable game terminal. Each monitor has different characters such as a chair or donut (personified by BBKY) awaiting visitors with a hungry look. It’s ‘Fingertip Dance’ that makes those characters dance using fingertips on control buttons. One of the WonderSwans is connected to a headphone, and on the monitor you can see a 16×16 grid where you can place dots on the grid and compose music. Characters on the right and left hand of the monitor dance to the music you compose. 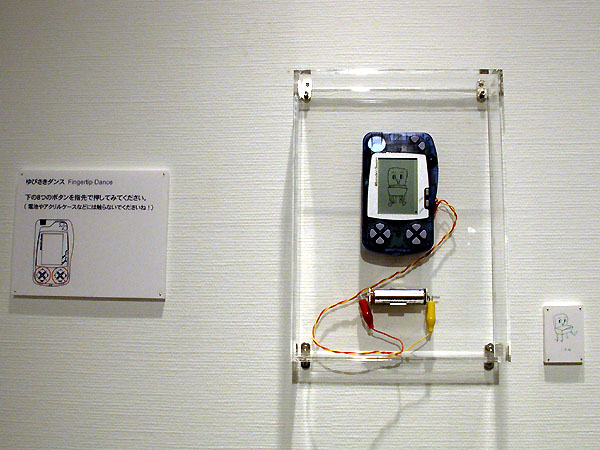 Like all of them, this is exhibition proved that general technologies around us like mobile phone, portable games, mini disk or a pet robot could create more happiness by using our imaginations.

The collaboration between Iwai and BBKY started when BBKY illustrated the report of the live performance of Ryuichi Sakamoto and Iwai. Since then, Iwai has been interested in her illustrations. In those days, he was interested in working with illustrations that have a feeling of handwriting, rather than so-called CGs. Then Iwai and BBKY realized that they had something in common in thinking and taste, and started their collaborations. 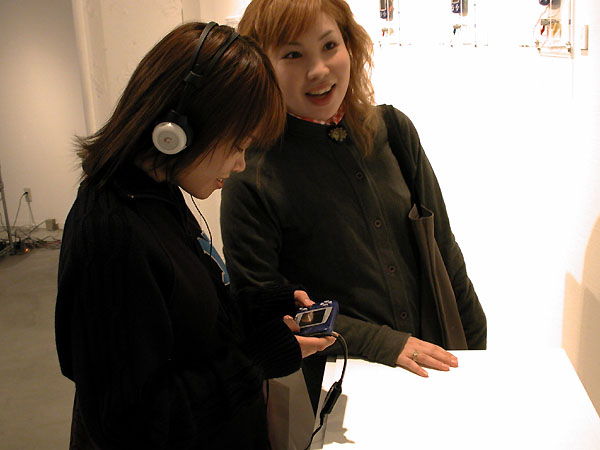 Their first collaboration was the illustration for an event called ‘Kodomo Syuukan (Child Week)’ held at NTT-ICC, a media & art museum in Shibuya this past spring. The Installation was entitled ‘a sketch book where a pencil meets computer’, with which visitors could draw pictures and some objects with a ‘magic pencil’ (a tablet pen) which could be operated with a computer. By tracing the monitor as you like, you could make it rain and turn the record to enjoy visuals and sound. There was another version that you could change the shape of characters and make them dance as you like. Different from other interactive pieces, it seemed the installation made a silent instruction just like the BBKY’s illustrations gave people who played with the installation the space of their imagination.

They felt a lot of interest during the process resulting in many ideas.

“Even when we’re just chatting at a cafe, so many ideas to be realized come to mind.” “Rather than making a thorough investigation of something like a professional, I can’t help looking into the approach itself, not the completion”, Iwai says thinking about the process.

This exhibition gave us a glimpse of one end of their ideas that come up with one after another.

“Next year, I want to develop this exhibition more and more using various devices that allow visitors experience and make them happy…”. Iwai are looking at the next step of his endless ideas come from the collaboration with BBKY.