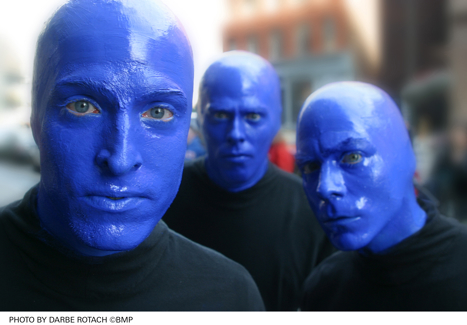 Ever since its opening a decade ago, the Blue Man Group has achieved a tremendous amount of success. They now have shows not only in New York City but also in Boston, Chicago and Las Vegas. They are even featured in recent Intel commercials in which they use Pentium 3’s logo as a motif to perform with. And these happen to be the most memorable Intel commercials.

The Blue Man Group is probably the 90’s icon of experimental theater gone commercially successful while remaining its original quality. De La Guarda would also fall into this category.

The Blue Man Group also produces music (they in fact sell their CD called “The Blue Man Audio“) by using their originally invented xylophones that are made out of regular household pipes and tubes. Another musical piece of the Blue Man Group is drums, which are equally simple yet amusing. In one scene of the show, the performers play drums in the dark with long sticks onto which LED signs are installed. This displays a unique typographical play within a theatrical experience.

Bruce Nauman, an influential American artist of the late twentieth century, once said that “the point where language starts to break down as a useful tool for communication is the same edge where poetry or art occurs.” And that is where the Blue Man Group belongs.