A while ago an art e-commerce site called Brit Art launched in the UK. The launch was supported by a brilliant ad campaign, where they labelled everyday objects as entries in an art exhibition catalogue, slightly mocking the pretensions of the art establishment. Stickers featuring the title of the “work” in bold black print, year, and descriptions, were scattered all over London.

Where ever I went there was a label stating something like ‘Pavement 1960’ on the ground in front of me, or ‘Lamp Post’ “steel pole (hollow), glass, dog urine, 200x 10x10cm” on the lamp posts I passed on my way home, or ‘Wallpaper 1950’ on a wall in my local bar. The labels did a good job. Art or not, they made me stop and think of everyday things I normally wouldn’t notice in my surroundings. 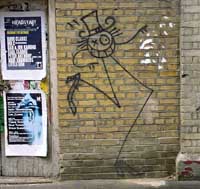 Like this new Graffiti character. Some areas in London have been plastered with newly made graffiti characters. Tall, long legged, funny looking men, with square or round heads, and with the arms and legs coming out of their heads. They seem to be spreading like a disease.

I was in Paris last weekend, and of course the same character was there too..! Back in London earlier this week , I met Bigson on Hoxton square, we were standing chatting away, when I looked up at the building next to me. The same character. Again. We discussed the subject briefly, and of course B. had seen it in several places in Tokyo too.

I can’t help thinking is there a the reason behind them, or why they’re been put in this particular place? Remember the space invader character previously* same thing* Not everywhere, but in certain areas, where certain types of people go. I saw the long legged character in Shoreditch and Soho in London, and naturally it appeared on rue Obercampf and in les Marais in Paris too. It’s obviously targeted. OR IS IT?

Is it there to be
a) noticed, to make the creator famous as the inventor of the long legged man?
b) A trial Marketing campaign for a new , yet undefined product or service?
c) for no reason what so ever, It’s just someone having fun?

I really hope it is the latter, but unfortunately I’m sure It’s all a conspiracy in the end. In a month or two someone is going to dress up as this man, walk around London, and try to sell me a new pair of jeans, alternatively, the new flavour of some drinks brand*.

Until it happens, it gives me something to think about instead of the constant drizzling rain.