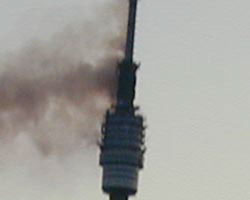 This month there is few news. Except one – due to the fire in Ostankino (Moscow’s main TV-tower), the whole city of Moscow was totally cut off from a supply of television for nearly a month.

Something we could only go through in S.F. films became vital reality for the citizens of Moscow. One was really going through it, because millions and millions of people can not simply imagine life without their daily dose of TV.

At first no one could believe in what’s going on.

One could see more people on the streets of our post-summer-city. People looked better and brighter. Cut off the usual lifestyle they began looking for some new ego-sources. Moscow awakened. The crime rate increased.

The quantity of Internet users rose. Unfortunately only the number of users chnaged. There were no new projects that are worth seeing. 🙁