When I first walked into the Guggenheim Museum in the Upper East Side of New York City recently, my immediate reaction was “This is what an exhibition should be.”

With a dazzling array of video installations, projections, and moving images, Paik transforms this building by Frank Lloyd Wright into a wholly unique multimedia experience. Even though many people, especially tourists, come to this museum for its architecture, his overwhelming body of art work provides something truly extraordinary, making this show one of the best in the recent years.

Quickly and energetically, Paik astounds visitors with “Modulation in Sync” on the first floor of the exhibit. In the middle of the rotunda, a laser beam shoots up through the heart of the museum, all the way from the floor to the seven-story high ceiling, creating a projection of dynamic geometry. Another laser installation part of “Modulation” is “Jacob’s Ladder,” a green laser beam cascading through a waterfall that also runs through the height of the museum. 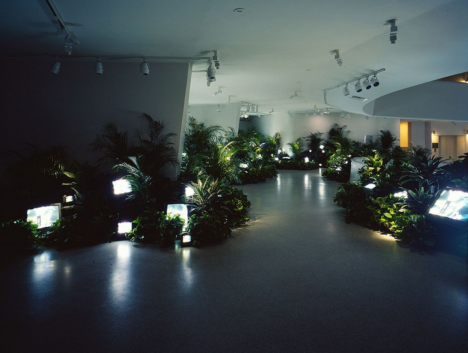 On the floor of the same space, an ocean of television monitors fills the audience’s view. They project mesmerizing rapid images, which also echo throughout the space in the video projections along the spiral ramp of the rotunda. Within minutes of entering this exhibition, the viewer is introduced to and absorbed by the unusual, yet marvelous video worlds of Nam June Paik. 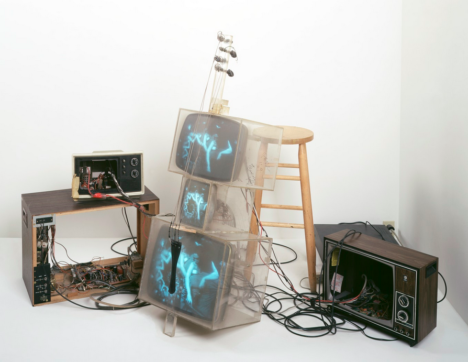 Active since the late 50’s and early 60’s, Paik has been at the forefront of video and performance art. This retrospective show houses many of his historic and well-known works such as “TV Cello,” which was created for his significant collaborator Charlotte Moorman, a classically trained cellist. In one part of the ramp of the building is a piece called “Video Fish,” a sequence of twenty or more monitors, in front of which are fish tanks with live gold fish (a few dead, unfortunately).

What’s most astonishing about Paik is how timeless any of his pieces is. As radical and avant-garde as his art was 30 years ago, he is still and would be the alchemist of artistic expression, even had he not appear until today. A true pioneer is always able to break new ground regardless of his/her time period. Nam June Paik proves that he is one of them.