This month’s cover design was produced by Otto Greenslade, a multimedia creator living in London. You can see a number of interactive works with unique interfaces on his web site ‘Chaotic’. Though he has only been working in web design for a year and a half, he has been implementing his ideas for interactive experiments. We interviewed him about the web scene in the UK, etc. 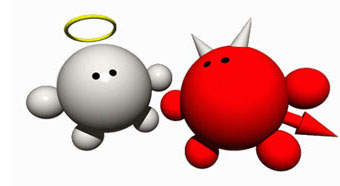 I am working for a multimedia company in Central London called Noomedia, as a Creative Director. I am involved with some interesting projects – the new Bacardi Breezer web site, creating graphics for shockwave games on Lycos, and re-designing the corporate ID of an online UK club guide called Rehydrate. Apart from that I like to go out and party or, if I have time, sleep.

How did you start working on web design?

I have only been working in web design for a year and a half, before that I was designing posters, CD and video covers, etc. for a studio in Soho. I have learned everything I know by trial and error. I bought a Mac about five years ago, and set about learning how to use it. I didn’t take any courses, or have anyone to ask, so it was up to me to just try everything out – it was a lot of hard work, but now I really appreciate how worthwhile it all was!

I learned Flash because I was studying the design industry trying to be one step ahead with what would be the next big change, I knew I wanted to do something related to the Internet because I found it so exciting as a medium. I found HTML on its own a little restrictive and unpredictable, but once I saw the power of Flash I knew that was what I needed to learn next. I had already established Chaotic as my personal brand, appearing in the promotional book ‘Making Sense of Abstract Design’ by Public Art and wanted to create an identity on the Internet to display my ideas and launch Chaotic into the public eye.

Could you tell us more about Chaotic?

Chaotic is my personal web presence, an online portfolio, although to me it is a lot more. It is the avenue or opportunity for me to do exactly what I want, with no restrictions and to feel that I don’t have to fulfill any criteria other than my own expectations. I have had a lot of positive feedback, people seem to enjoy my work, so I guess I must be doing something right! I am considering a completely new interface design, I’m just not sure when to implement it, or if it might be more interesting to evolve the current one.

What are your ideas on design and which personal principles do you follow in creating a design?

I just like to design things that are aesthetically pleasing, captivating and entertaining, even if only momentarily. Sometimes I toy around with just the colour schemes for what seems like an age until I am completely happy. With regard to personal principles, I have to take a quote from my site – simplicity plus complexity equals beauty.

You are using Katakana in your design. What does Katakana mean for you?

I find the Japanese language to be extremely visually pleasing, it adds something special to particular pieces, and for someone who can’t translate it there is an element of mystery, an added dimension which I like. In art, I find you don’t necessarily have to understand something to appreciate it (this is the reason I don’t supply explanations to any of the artwork on my web site, I prefer people to draw their own conclusions).

When you made the cover design for Shift this month, what did you imagine and how did you work on it?

It was all based around the name, I was thinking about what it meant to me, in a literal sense, and I kept coming back to the same basic idea of constant movement and change. It started with a simple wave motion (similar to that of a fish), which progressed to more complex animation over time. It did actually start off a lot more graphically complicated, but I came back to it a few times and refined the concept, pulling out all the unneccesary elements for a cleaner approach.

We would like to ask you about the web and multimedia scene in the UK. What’s hot now in the UK?

My friends at Insomnious are cool! They are doing some great stuff at the moment, lovely textural design and some really advanced Flash 4 scripting. I hope to collaborate with them at some point in the future.Ideaworks have just released the Vecta3D plug-in, proper 3D in Flash. It’s going to be really interesting to see what people come up with, it could revolutionize the current limitations of the Flash interface. I can’t wait for a copy myself!

What do you think about you being based in the UK?

I love it. For a time I worked in Soho – it was so exciting to be at the very centre of what was happening right then, seeing the latest fashions and design influences, etc. The only thing I would change about the UK would be the weather. I would love to move abroad at some point, I have this dream of being able to go swimming in the sea before starting work!

I love Japan. I am a great admirer of Japanese design, especially the attention to detail, and it has had a huge influence on modern design styles, reflected in the work of many of the top design companies. I would love to visit at some stage and bring loads of packaging design and comic books back with me.

I have made a concerted effort to overcome my fear of hardcore coding and learn Actionscript for Flash 4. The last time I did any serious coding was on my ZX Spectrum, but I’ve just decided I don’t want to be left behind, so expect to see some immersive, interactive experimentation on Chaotic soon. I was sticking to Flash 3 because nearly everybody has it, but now it might be time to go to the next level with all the new features of Flash 4.

Who are your favorite visual/graphic designers and sites?

My absolute favorites are the Attik, Designers Republic and Me Company, I think that they have led the way, I have a huge favorites list on my browser, but I though I would list a few sites that not everyone might have seen yet.

Reprotek : Slick and sexy design, very modern.
Smoke and Mirrors : Incredible shockwave.
Perfect : Brief glimpses of near perfection – in web terms (and because they put my site in their lists!).
Shockfusion : I spend quite a lot of time here, if it’s new and it’s Flash you will hear about it here first.
Netbaby : I am so addicted
to their games, its affecting my work!
Bam-B : Very different, purely visual, you just have to go and see.
Public Art : Very innovative design company, that I have been lucky enough to collaborate with in the past.

The last question. Do you have any plans for the near future?

Just more of what I’m up to already, some new interactive experiments and I am currently learning some 3D software and Adobe After Effects to do a Chaotic showreel in Quicktime – it’s proving to be a lot of work. I have this idea of having the two Chaotic characters, the Good and the Bad fighting it out Matrix style!!! Wait and see, but visit often.