Gill Wong is a talented graphic designer, experimental photographer plus an art director for film and design. Her studio, BILLIE & SUZIE, is located in a refurbished art community, formerly an area used as a Government Supplies Department in Oil Street, Fortress Hill. After our photoshoot with Chalk magazine, I started to ask about her life story… 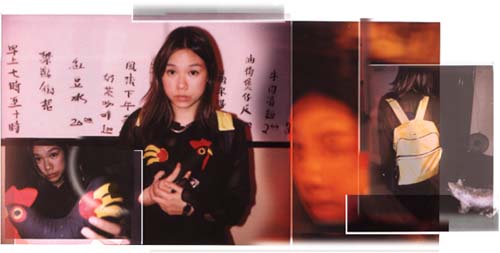 So where are you from?

… from a forest… an unknown forest.. long, long time ago

Seriously??…umm.. playing, playing visuals, noise… and guys (laughs). I was trained as a designer, in the School of Visual Arts in New York. After I graduated I went and joined Sony Music for 2 years, where I designed and art directed record covers and photoshoots. It’s a golden tower with a lot of support and resources. You get to see any famous creative portfolio in the world at your fingertips. Sony Music forced me to do many things that I have never done before, like the commercial aspect of the design field, and I learned a lot. Other more interesting things like office politics, hee hee…

1. Went to Beijing with Mr. O Sing-Pui to help out photographing his documentary "Red Memories".

3. "Short Film by Gill" a nine-minute video filmed and edited by myself. Walking movie instead of road movie. Everybody is going somewhere so I followed some, I picked some with bright colored clothes or limping people.

4. Yau Ching’s "Unchanged" – current project. I am art directing for this independent film set in Hong Kong about the near future. Art directing the costumes too. And it’s cool because I get to work with very super people in the crew like Venus Lai, a powerful and magical fashion designer. Apart from working in the New Year, it is really fun. Kum Kwok Leung and Sam Lee are playing, exciting passerby’s and I get to dress them!

5. Being photographer for Chalk’s photoshoot this month!

Is filming what you dreamed of doing as a kid?

Never really thought of it. I used to read comics, dream, … there was no real requirement of what I had to be or wanted to be. I studied psychology before I touched on design, which turned me into a more happy and OK person… ha

Why the move to movies?

I still love old Avant Garde films. It wasn’t categorized as much then. It has not been brainwashed by Hollywood maybe. Have you seen Stan Brakhage? Once he got different layers of films and juxtaposes them. He would cut out wings, legs and bodies of insects and stick them on the film, edit it, and play it back. For half an hour, you see just flattened layers of insects and stuff projected and rushing through the screen nonstop. Amazingly beautiful.