In its second year "Happening" was held from October 8th to 17th. This exhibition showcases the works of 30 designers of interior and furniture from England, Germany, Holland, Italy, France, Japan and other countries at spaces in boutiques or cafes of Harajuku, Aoyama, Shibuya and Daikanyama areas according to their tastes.

Audiences get a catalogue at each boutique, cafe and major bookstores instead of ticket. During the period, they try to find out furniture of good design/concept with a map on their hands and take pictures of the works with a Polaroid camera which is set at each space. And they paste the pictures on their catalogues and complete their own catalogues of Happening.

I wasn’t able to go round all spaces, but to mention some impressive works, Inflate represented "MEMO", a sofa can be varied the form as you like by releasing air with vacuum cleaner, Radi Designers represented a bench shows a form of dog in side view, D.I.M. has succeeded to restore a brush factory that the blind is working in through design, Flask represented a set of black chair and table titled “36°” that changes its colors by temperature of dishes and bodies. I’ve heard that "MEMO" will be sold for about 30,000 yen in Japan and am thinking to make a reservation right away. 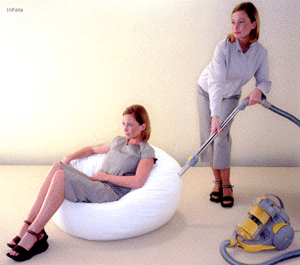 This event that involves people who are walking on the street as audiences will be developed as a space to showcase happening contemporary designs in the future. In this transition stage from the 20th century to the 21st century, things are changing slowly around us with evolution of hardware and reconsideration for software. In such situation, I am having great expectations to interior designs that lead to designing one’s lifestyle itself, and looking forward to the next year’s Happening. 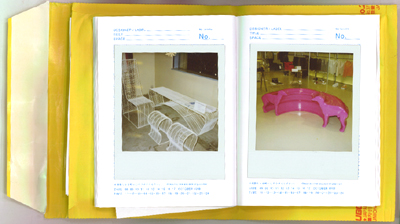 I like this catalogue with an envelope of a yellow packing. I think it’s an idea from a tight budget. It’s really convenience since the packing protects the Polaroid. It’s also useful as a pocket to put a map, postcards and pictures in. I used it as a simple bag. It’s definitely Good Design!