From the 29th of July to the 8th of August Hamburg had their annual Freiluftkino in front of the Rathaus (city hall). So all the moviegoers gathered before dusk with chairs, blankets, and other objects of movie support and settled down in front of a giant sized outdoor screen awaiting the start of the film. I only saw the beginning of one movie, Schwarze Katze, weisser Kater (black cat, white cat), before it started to rain and people headed for cover or pulled out umbrellas. 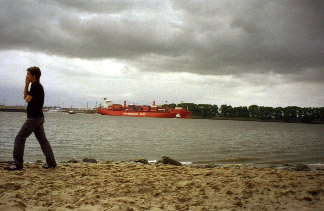 Also happening this month was the 13th annual Fantasy Filmfest, a festival dedicated towards bringing the viewers science fiction, horror, and thrillers. Held in the very commercial Cinemaxx theaters, the crowds had their choice of a multitude of movies. I decided to see two.

The first being the David Cronenberg’s latest release “Existenz” and a 1998 Hong Kong release “Ballistic Kiss”. Also playing was the incredibly hyped film “The Blair Witch Project” which I saw while I was in New York. A quick note, if you’re the kind of person that gets motion sickness playing Doom or Quake, this movie will have the same effect. After seeing through the first quarter of the film, I felt like I was going to puke.

Also happening in Germany was the solar eclipse of the sun. And if you were lucky enough to be in the southern part of the country, you got to see a full eclipse. In Hamburg we are treated to a dense cloud covering and a peek of about an 85% of the moon in front of the sun for about 60 seconds.