Satoshi Tomiie is a producer who plays an active part in the underground and mainstream music scene having dealt with lots of well-known artists such as Mariah Carey, Madonna and Michael Jackson. He has also traveled around the world as a DJ, regularly gracing the turntables of lots of the best clubs in NY, UK, Germany, Italy. Satoshi’s long-awaited album is ‘Full Lick‘. We interviewed him about his new album, a career spanning 10 years and the Japanese music scene from his international point of view. 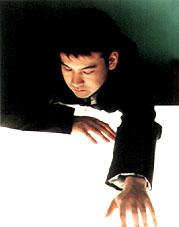 You’re based in NY at present. How often do you come to Japan each year?

Three or four times. I’m in Japan for about one and a half months total and in Europe for about three months. So I’m in NY for two-thirds of a year.

This is the first album of yours you have produced. Please tell us about the reason why you hadn’t produced your own work until now.

I think dance music isn’t music for an album. I haven’t cared about making an album for a long time. But I was thinking to do it in a different way about two years ago, then I tried to do an album. I’ve been fed up with doing the same things for a long time. I didn’t do this because I was inspired by something by someone, but it’s a natural stream in my mind.

The first press limited edition is a set of two discs titled ‘Yin & Yang’. I think various things such as the double personality everyone has and your activity in both the major and underground scene feed back into this album.

Well, that might be so. There isn’t such deep meanings though. It’s just a contrast that there’s a shadow because there’s a light. We hope morning comes because we have night. Just like that. I don’t want to do just one music. In fact, there were various kinds of music for the album, but I selected House tracks from among them. Maybe there’re only a few tracks except for House, but I wanted to leave an impression with them.

Lots of musicians contributed to this album. Did you select them by yourself? Also, is there any musicians who left strong impressions with you?

Well, basically I did it by myself, though some were introduced by someone. All musicians gave me strong impressions, but Kelli (Kelli Ali) was unexpected for example. The music that I did was also unexpected. It was interesting. Dian (Dian Charlemagne) is a nice person. They inspired me in a musical sense when I was making music. I know what kind of sound will be born If I make it with the artists who I’m familiar with, and I wanted to finish with the results that I’ve known, but it was nice to collaborate with people who had never worked with me.

I think club music that has been considered underground is becoming linked to the major scene. What do you think about such a scene in Japan? Do you think this is a good trend?

I think it’s good. If only core people is doing that, the scene won’t expand at all. On the other hand, such people harbor ill feelings against the mainstream though. Of course music that is not-so-cool might be made and become popular, but strange-but-cool one will be born.

What is the greatest difference between the scene in Japan and in the US, UK, and Europe?

There’s a great difference between the English and the Japanese languages. Music is a sort of an initiation ceremony for European and American young people. I think it’s just like a karaoke in Japan. It’s a great difference. In Japan they seem to be on their mettle to be a clubber.

In Europe, lots of dance music clips are televising on MTV, etc. in general. It’s an ordinary music like popular music. Adventurous things in club scene can be accepted by European people. In Japan, it’s difficult to run a risk because there’s not many people going to clubs. For example, in some local cities sometimes it’s difficult to do things we can do in Tokyo.

It’s ok as we can see they’re trying to enjoy it though. The reason why people cannot come along with us when we do things a bit strange is because of the small clubber population. In that sense, it becomes more interesting when the number of people who are involved in dance music, including the major scene, increase.