This years Mecon, the congress for digital production, brought with it a few surprises along with a slew of new talent. Held in the shadows of the Dome, along the Rhein river in Cologne, the Mecon brought together the film and online industry to share some of their knowledge. 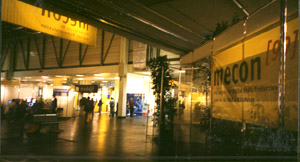 Keynote speakers were Carey Villegas from Digital Domain and Lara Stein from iXL, New York. I wasn’t present for the first keynote from Carey Villegas, but I can imagine he showed some of his studios special effects to a delighted crowd of EFX junkies.

Instead, I opted to attend the keynote from Lara Stein. She started with what I thought was a rather dark theme, the people with access to the new communication technologies versus the people without the technologies. This led up to her main topic, electronic television.

Showing some examples of how iXL views the future of the mixing of television and the Internet one would have to wonder if this is the direction it’s really all going. Or is it just some industry media suits wanting to cash in on the dying television audience and pick up on the Internet hype. Whatever the case, I am not very convinced by what I’ve seen so far.

With a line-up of speakers that included myself, the following presentation dealt with “third generation” Websites. The format included a round of show-and-tell from the people presenting and then a discussion on communities in the Internet.

I started-off the presentation with brief summary of what we are trying to accomplish at Fork Unstable Media and then followed it up with a few of our projects. Next up was Marcus Beier from ID Gruppe. Presenting projects ranging from the Swatch Site to Cycosmos one could see at ID Gruppe is working on the commercial end of the digital spectrum.

Others to speak were Kai Knoche of Real Networks, Hubert Gertis from Icon Medialab, and Jerry Sullivan from Gift Express. 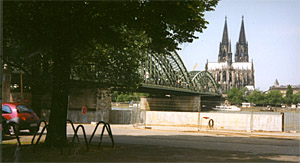 I also had a chance to see the presentation from Chris Kubsch of Industrial Light and Magic. Showing scenes from the making-of Deep Impact to the Mummie enchanted the packed out crowd and elicited a hearty applause from all those wanting to become the next special effects.

I also checked out the presentation entitled Online/offline Screen Design. This was also a diverse group of presenters including Florian Dengler from Pixel Park Berlin, the ever-resent Eric Spiekermann from MetaDesign, and Tanja Diezmann from pReview.

The most interesting was the presentation from Tanja Diezmann. Besides having a design studio in Berlin, she is also a professor at the Fachhochschule Anhalt. Tanja presented some of her student’s work that dealt with the combination of television and the Internet, the same topic that iXL is dealing with and many other large media corporations.

Dealing with the same issues, like how the user will manipulate what’s on the television screen through various interfaces and remote controls, made me wonder if we should not be looking deeper into the wants and needs of the end-user.

Where are we headed? That seems to be the question that everyone is interested in whether you’re doing special effects or online communication. The mecon touched lightly upon where it might all be going but I guess we’ll have to wait till next year to see where it all went.