Australian based performance artist Stelarc has been experimenting with new approaches to the internet in the recent years.

In the course of time he has wired his body (with a 3rd electronic limb) to the internet so that it can be controlled externally; has organized to implant a 3rd ear – one which will emit rather than receive sounds; and has wired his body to act as a projector for randomly retrieved jpeg images from the web, such that these simultaneously cause involuntary muscle movements (which are then mapped in realtime VRML). Nowadays he’s walking around in a specially constructed 6 legged pneumatically powered walking exoskeleton.

You’ve been based in Australia for awhile now, but I understand you’ve spent much of your life in Japan as well…

I lived in Japan for almost 20 years. But having decided to pursue performance full-time the last 12 years it’s meant being constantly on the move. I’m out of Australia 9-10 months of the year, doing performances and presentations mostly in Europe (and occasionally in Japan and the USA)…

Physical space itself seems to be increasingly less important nowadays… how do you think this is affecting our sense of physical and mental orientation?

Well, going somewhere else used to be special. When you’re everywhere all the time the experience of space is more fluid and less discontinuous. You have to cope with different currencies and different cultures on a constant basis. You can’t take things for granted and you have to communicate with different people in alternate situations. Often this results in more stimulation, but with feelings of insecurity. It can be devastating with your personal relationships and an experience of functioning at greater speeds and with less connectivity. But it is possible to improvise, to communicate with email, that allows you to somewhat cope….

Which of course brings us to the internet and virtual communities. In performances such as Fractal Flesh (1995 “Telepolis” event), and – there was a sense in which boundaries of ‘self’ and ‘body’ were relinquished; that the internet community could exist as a kind of organism, aware and responding to itself – how close do you feel this has come toward being realised?

Well, there is a need to distinguish between what actually happens in individual and particular situations and in speculation about the internet becoming some imaginary construct or community. 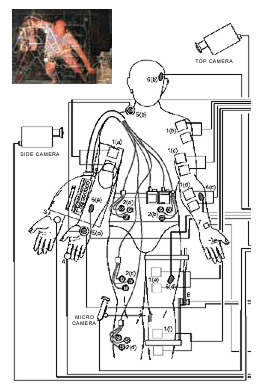 Fractal Flesh was this particular and peculiar experience of becoming a split body, simultaneously coping with the a remote agent and this local agency . Someone, somewhere else could access your body and actuate it. From their point of view they were extruding their awareness and action into another body elsewhere.