A fifteen meter high gigantic figure engulfed in flames. Naked men and women walking proudly. More than ten thousand participants under a burning sun. The spirit of ‘No Spectators’. ‘Burning Man‘ is a kind of new festival and culture which came about in 90’s San Francisco, the orogin of the hippie and rave movements. 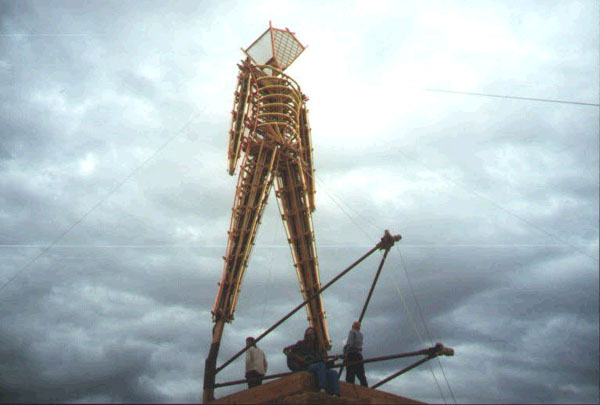 A fifteen meter high wooden doll called ‘Burning Man’ is built up in the awful vast desert as the symbol of this event. Participants camp out surrounding it, drawing a semicircle, and building a new city to last only 7 days. They enjoy performance and rave.

The spirit of Burning Man is ‘No Spectators’ and every participant is considered a performer. Performance starts suddenly and in an impromptu manner. This is the great difference between Burning Man and other ordinary raves. Ordinary Raves have a certain form as ‘performer and audience who come to see the performers’. All participants of Burning Man have their own freedom to do anything they like.

We can see lots of great performances there because people who support the underground scene in San Francisco participate in Burning Man. Radical performances like the huge painted cloth being burned by a flame-thrower in the sky can only be seen there.

People are walking with nothing on quite naturally and women are forming a line at a barber shop specializing in body and pubic hair. Bicycles are decorated colorfully and a ‘running sofa’ with a motor and tires can be seen running.

This year a Japanese finally participated in a Burning Man performance. He created a tea ceremony room of Rikyu. His attitude of his original ‘Japanese taste’ in the desert received a great ovation.