A bit of techno for this wonderful Month of March (Well people that have ever seen Paris in the first day of the come back of the sun will know what I mean… Back to the cafe’s, let’s stay outside and drink Pastis or demis and watch the skirt going shorter everydays…) ; at the Batophar, old firemen boat from Finland staying in front of the grande bibliothèque on the Seine. 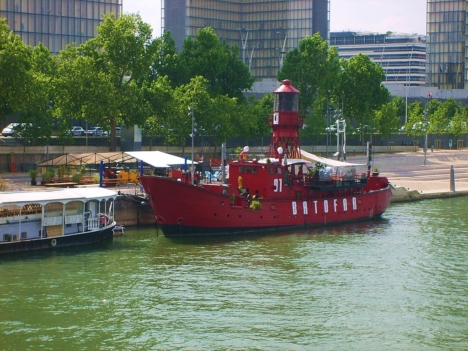 There was a huge new German electronic school festival for one month. We saw there the brat leftist label DHR (uggly sound and punky performance), and the very hype Chain Reaction (Maurizio is the icon, but he was not there, by the way check out his last “rythm and sound” album…electronic dub for mellow days), minimal techno with a lot of effects, slow almost dead dub tracks, mixed with reggae, Plastikman (Pole was responsible for a mix of Hawtin’s masterpiece Consumed with old dub plates), house music, long transition, and strangely a very psychedelic atmosphere for a very dry music. People can’t dance really (too slow, not enough “grooves”) but everybody get hypnotized by the dubby atmosphere.

In a beautiful place really, the inside of the boat makes me think of a futuristic vision from the 19th century (Have you ever read Jules Vernes?), with all this metal screw everywhere. Sadly the boat was not a moving techno festival, on the seine, with the nice weather of the spring it could be a great idea…

As part of the International French Language Week, Ousmane Sow, moved his sculpture and brought “War on the Seine”. Interesting exhibit on the “Pont des arts”. With his giant-likes statues of Native American warrior during the famous Custer deafeat at the battle of the Little Big Horn. It’s a nice moment to wander on this bridge, rediscovering it and seeing those soldiers in very violent positions. A death ritual. Statues are massive, impressive, violent. You look at them with respect. Tales of a time war was not a matter of image, but a matter of strength, of body against body, of silence also.

Jerome Bel, french choreographer, deals with the same topics, that dance deals with, at first of them, of course, the signs / language of the body. That’s why, Shirtologie, is a very interesting piece. Just people wearing T-shirts. 30 t-shirts or more they take off one by one. Perhap’s a sort of summary of all the concept dance deals with : the language of the body, becomes a real language, with signs and words, if you consider the T-Shirts. T-shirts have a self meaning, and another one in interaction with the personns that wears it, they also have a more secret meaning, in interaction with their environment. Then the body has two languages or has now a language helped with real signs.

That’s what I understood of Shirtologie, and I more than this laughed a lot, a boy and a girl wearing the 6 and the nine meet, a persons follows the other one that wear a “follow me” T-shirt. Following those principle, all could be simple. It creates of course stupid situations. Shirtologie will soon be played in Japan, and I advice you all to go and see it. This is about body, movement and signs… But hell this is certainly not a dance spectacle.