As I wrote in my Best 5 last month, I’m watching animations almost every day. Recently I came to watch Gasaraki (Ryousuke Takahashi), but it starts from nine thirty in the morning. My girlfriend watched it and wondered whether it’s no problem that such animation was telecasted in such early morning. I’m not good at video recording, so I have to get up to watch it every morning. I had real dreams that I overslept and missed Gasaraki for three days in a row last week, but when I woke from a dream, it was thirty minutes before it started. I wondered I was still dreaming. By the way, I’m watching it peacefully. 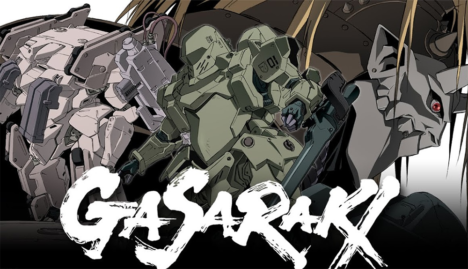 This ia an old information that I watched on TV, the designers of Beauty and Beast are also watching Gasaraki and held a collection being conscious of Gasaraki. The way of expression was interesting, I remember that the concept was time. They gave Eye-Trek to audiences, filmed the models walking the stage, synthesized the film to the image prepared in advance and let the audiences watch the techno image the models are walking fluffily.

On TV, the image collaged the poem by designers, scene of the collection and Gasaraki was broadcasted. To tell the truth, I had an impression that it was unrefined. But it was enough that let us feel the new age. In the present situation that there’re a lot of arts below than foliage plants here and there, the collection of Beauty and Beast that expressed the things they want to tell straight and powerfully let me feel the crystallized designers themselves. The comfortable feeling is still lingering to my mind.And in contrast to it, the refined style of UNDER COVER is too cool. It’s stupid to make a distinction between Osaka and Tokyo, but I just think of.

I’ll be back to the important subject of animation, ‘Anime Hihyo (Review of animations)’ was first published as an extra issue of ‘Game Hihyo (Review of games)’ that remain aloof from the surrounding vulgarity having a concept that do not get a sponsor. This is great. I’ve been waiting such reviews and articles. The bitter reviews because of love for animations teach the readers not only the natural things what is left by feeling the animations but also make what is important and what is not enough clear. If possible, I really hope all writers emulate this attitude. Everyone, let’s read it.

And as to the latest issue of G20, I was anxious about it because I’ve heard that Mr.Koga of Paper Shop had left for various reasons. But it’s really great. It replys completely to the subject of New Type that we’re most hard to mention. I can shift my mind onto the next GUNDAM. Thank you.

Besides, my favorite illustrator Yoko Kawamoto seems to hold a private exhibition from 12th, December at Gallery Rocket. I met her artworks on a magazine ‘Soen Garou’ and impressed by the beautiful landscapes. I knew she won a prize at Choice awards of this year at an illustration magazine. Congratulations! I’ve never met her and her artworks directly, so I’ll go to the exhibition by all means. Now I’m fascinated by some illustrations and paints of Hiro Sugiyama, Mr.Aoshima of Paper Shop, etc.