If the Sankai Juku company is considered as stars in Japan (It was born in 1975) Buto dancing is still an enigma for the french audience. This enigma fascinates and most of the time gives rise to a complete success. I have always wanted to see their performance but It has been an exploit to buy a ticket. Sankai Juku in Paris infortunatly means sold out. 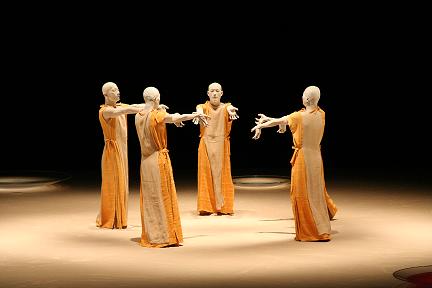 This Year Ushio Amagatsu the brain and the body behind Sankai has decided to give us two presents. The first one is the premiere of “Hibiki” a new creation that happens for the very first time at “Theatre de la ville”, the big surprise is the reissue of “Shijima” a 1988 creation. “Hibiki” has been secretly conceived.

Nobody was told about it. I won’t dare describing the staging cause it is a preponderant element. The organic slow dance evolves with the organic set of the scene. It’s splendid, emotional, quasi- irrational and it makes some people cry soundless.