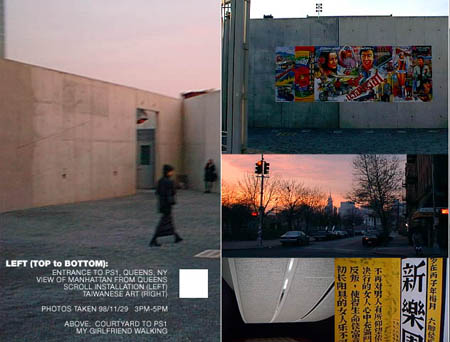 PS1 out in Queens is holding a great show called Inside Out: New Chinese Art. It is an exhibition showcasing modern artists from this century in mainland China, Taiwan and Hong Kong as well as Chinese artists living in other parts of the world. A lot of the artwork shown had a very strong political overtone, shunning away traditional Chinese values and specifically the Chinese language.

As China’s script and characters represented to a lot of the artists the society and government’s ideology and bureaucratic administration, a good chunk of the works played off and rebelled against the actual script. This was fascinating to see especially from a viewpoint of someone who can not read Chinese. In a lot of the explanations, this nonunderstanding and confusion was the point; to blur the line between Chinese and nonChinese, its values and other values, to question China’s ways.

One installation that stood out was a room covered in tapestry all created by hair collected from 25 countries around the world. The hair was glued together to form these carpet like curtains; and within these “hair curtains” were characters from different languages including this false Chinese language that did not mean anything. Other works addressed Hong Kong’s cultural society ignoring their current local art scene.

Videos of artists blasphemizing Chinese culture, and staging public demonstrations and performances were shown along side the installations and pictures. The actual pieces themselves were not as powerful as the meanings the pieces were trying to convey (as may be the case with a lot of modern art) but these pieces were definitely carrying the burden of some serious messages about Chinese culture.

A lot of the work dealt with traditional elements like the language and manifested in twisted versions of scrolls and ink paintings, but there was also work which broke away from just focusing on the immediate culture and society. Ideas of rationalism and objectivism showed through works that seemed as Western as it did Eastern – video installations as well as paintings and drawings which beared no semblance of asianness. I went expecting to see more art that was tied to mass media and consumerism; but got a serious (but not humorless) dose of some great modern Chinese art.

And as an added bonus, upstairs in this great renovated space, was an architectural exhibition called Cities on the Move. It was an exhilarating exhibition about an international project “exploring art, architecture, urban planning, and social climate of Asian cities”. With contributions and works from the Graduate School of Architecture at Columbia University, Bernard Tschumi, Greg Lynn, Rem Koolhaas, and many practicing in and studying Asian cities. Along side the larger cities such as Hong Kong, Seoul, Kuala Lumpur, Tokyo, and Taipei, many smaller Asian cities were the focus of these projects.

Some projects manifested in the form of walls and tables covered with photos in a documentary style; depicting in plain form everyday life in these Asian cities. Computers displayed slideshows in a more narrative fashion. Architectural drawings and studies were hung across the walls, along with video and slide projections of urban studies and urban pictures. All addressing themes of the inherent hyper complexity and acceleration (traffic, congestion, urban infrastructure, etc) in most Asian cities. In the midst of it all, there was a golf course with putting irons so that people were able to play miniature golf. I didn’t bother to read what the golf course meant, so I still can’t figure out how that related to Asian cities.