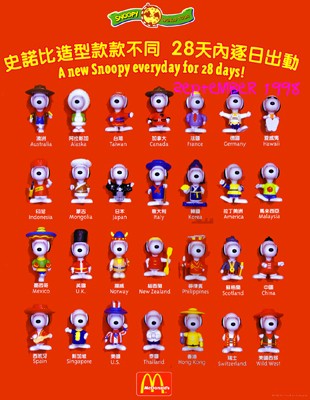 For 28 days from September to October, McDonald had carried out a campaign of selling plastic Snoopy dolls which are about 5cm tall and each doll costs 6HK$ with purchasing a value meal set. These Snoopy dolls were dressed differently everyday with presenting various countries, say, Japanese Snoopy wore Kimono.

This campaign drove HK people crazy, as they queued up front of McDonald shops from early in the morning to collect all 28 different kinds of Snoopy. And it became a social phenomenon as well. Snoopy is popular among not only kids but also adults. However during this campaign a lot more adults were attracted to these dolls than children because of the resale values.

It seemed a little investment rather than pleasure. Since money involved, many people got too hot. Some people sent their old folks to McDonald 6:00 in the morning and asked them to buy six or seven dolls. Some were taken care by police because of skipping the line and a woman fainted but refused the ambulance came to help her and tried to stay in the line.

In the last days of the campaign, many buns were through away without a bit! It’s true that there were real collectors of Snoopy goods or McDonald’s goods and children in the long queues. However it seems that most of people in lines were under mass-psychology. McDonald had already finished the campaign but currently it’s preparing additional Snoopy dolls.