Marc Nguyen is a graphic designer who has developed the cover images for this month’s SHIFT. His main area of creativity is in Paris, where he is in charge of the “Dotmov” site. multimedia design team, which are focusing on multimedia contents.
We spoke to him about the design scene in Paris, about Shaman and Dotmov. 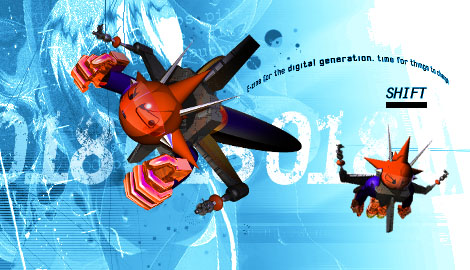 My name is Marc Nguyen and I’m a 24 year old graphic designer. When I was a teenager, I wanted to be a musician, although my involvement and my interest of design is the result of quite a long reflection upon electronic arts/ applied/ commercial arts.
Then I’ve been studying motion picture and broadcasting at the University of Vincenne, which is one of the sleaziest universities in Paris.
Later on I have started working for ‘Grolier interactive’ quite by coincidence, as it was starting it’s own web departement. I’ve worked there as graphic designer for 2 years then started my freelance career.
Today, my biggest client is the Shaman design company, and I now work in their studio.

Can you tell us more about your web site Dotmov?

At the beginning I was more involved with it, as my professionnal work was strongly connected to web design (actually it was 90% web design).
Today designing websites takes up a lot less of my work time, and I’ve less and less time to spend on dotmov. I would like to work on very small websites, but very efficient, something like one idea, one feeling, a few words and 2 HTML pages, and that’s what I’m working on.
Today, Dotmov is more a directory in the “computer” sense, than a website, a folder where to put stuff online. I’m currently working on a series of small visual poetry and I think that I’m going to put them on dotmov.

I know that it’s quite disturbing for people not to have particular goals and aims when making a website, and that the popularity of a website depends a lot on the consistence of the content. I don’t particularly care about it, as my goals and interests have changed a lot since I’ve started this personal project.

Actually, the global purpose of online “graphic design” stuff is less evident for me. It’s the result of a very simple equasion between what exists on the internet and what is really useful. I see more and more heavy websites, perfect design, seven-like typefaces and all that kind of things, animations, innovative technology but I also read more and more superficial and dumb contents. I think that one side of the evolution of the web could be a return to fast and intelligent text interfaces, that will force people to produce real and meaningful contents.
Surprisingly, my favourite websites are not designers web sites, but content-based ones. One of them called “life with father” is the most intense experience I’ve ever found on the web; it also uses a clever interface, and an interesting way of editing a novel on the internet.

What are your ideas on graphics and design and which personal principles do you follow in creating a design?

First, I think that graphic design means so many things today from title sequencing to print /interface /object design that it simply becomes design and not particularly graphical. One of the last graphical things might be the graphical “interface” of your computer. In this sense, graphic design would mean something produced using a visual interface and a monitor.
This definition is quite important for me because it does not only describe a work based upon aesthetics, but work that pushes the designer to always reconsider what he has done in the past. For example, improving web interfaces with old works on print : a crossroad for different ideas and different realities.
My other “work state of mind” is that design is for the others, for the people who are going to read/see/ use it, and then it becomes a work toward and for the society with an important political dimension to it.
For me design, even more than an fine arts, is social and political. The web is a good example for this, considering its global financial goals and the model of electronic commercial society it’s holding within its basic communication concepts.

The pity is that a lot of self produced graphic designers’ or studios’ projects are without any content and meaningless today. I’ve just read a French article in which it said that generally graphic designers just don’t know how to write, because most of the time they’ve got nothing to say. The problem is that a lot of people have nothing to say, but they don’t produce wide mass-distributed meaningless visuals that rule the way we see life.

In this context, I prefer the work of people like Auriea Harvey from Entropy 8, even if I don’t understand or like some ‘graphical’ choices she has made because the heart of her work is based on important political questions like “women and black people in the united states of the 21st century”… and she has answers for that!

My main interest at this point in time is certainly the art of title sequencing, and all this motion design work. While studying at university I first wanted to edit movies, so it is a sort of return to my true passion, and to the art of cinema. I’m currently working on different TV projects and I’ve just finished with the shaman team, a work for Cedric Klapish, a famous French director.