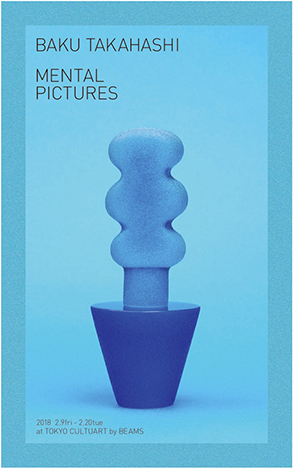 Baku Takahashi Exhibition “MENTAL PICTURES”   The solo exhibition by Baku Takahashi which visitors can buy his works will be held at TOKYO CULTUART by BEAMS from February 9th to 20th.

He is a glass artist based in Fukuoka.   Baku Takahashi started his own studio in his hometown Fukuoka in 2015. Through his daily glass creations, he sometimes discovers that they show some new expressions or phenomena which he has never seen before. He has tried creating his works focusing on these new things and was inspired by them. His hand blown glass works made through repeating of his drawings, give us softness, expressions as if some animals, and attracting people.

This exhibition will showcase the items of glass wear brand “TOUMEI” which he founded with Tomoko Wada in 2016.