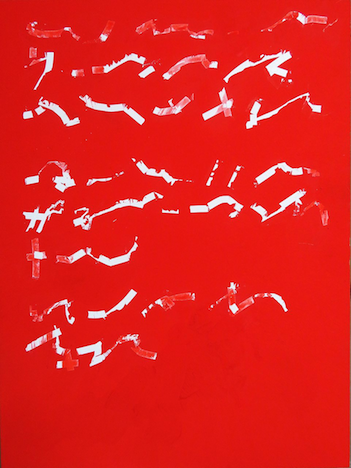 An exhibition of KOUNAN will be held at eitoeiko from May 20th to June 10th, 2017. KOUNAN are an art group that are skillful for making their performance outdoors. KOUNAN call their performance as “Participatory Act”.

They respect the preceded artists who made art performances such as happenings. With the Participatory Act, they make reference not only to a 60s-80s contemporary art history in Japan but also to a whole history of art. KOUNAN are sensitive about the fact that art is a media which needs to be recorded and succeed to the history. However, they also have bravery to betray the history vibrantly.

At the exhibition, the members of KOUNAN will challenge an official licensing examination of shorthand. Shorthand was used into the art form, for the expression of drawing by Pollock or Twombly. KOUNAN reveal the mystery of the extremely abstracted accumulation of curved lines by their interpretation.