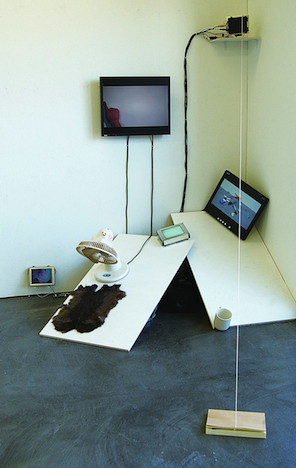 A solo exhibition, “Hyper Here Now” by Akihiko Taniguchi, a media artist who is also active as a member of “Omoide Yokocho Informatics Academy of Arts and Sciences”, will be held from 8th to 23rd of April at CALM & PUNK GALLERY in Tokyo.

Taniguchi has produced works in various forms of installations, video works, and internet art. When comparing the installation works using images among those, it seems that there is a certain consistent theme.

This exhibition looks back to his activities over the past ten years, and shows some works which were selected from his past works. By placing more than ten or more works including works that had little exhibition opportunities and the renewed works in one venue, one can reveal and follow his track of thought and practice for over 10 years.

During the exhibition on the 15th of April, a talk event on the theme of display / computer / internet as a medium will also be held with the invited guest, Houxo Que, Kosuke Nagata.