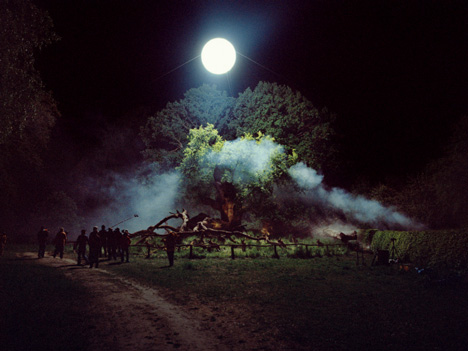 ARNDT Berlin will present Julian Rosefeldt’s exhibition ‘My Home is a Dark and Cloud-Hung Land’ to mark the ten-year anniversary of the gallery’s partnership with the artist.

Since beginning his artistic career twenty years ago, Julian Rosefeldt, who has lived in Berlin since the late 1990s, has continually dealt with German history and approached questions of national identity and myths in photographs as well as film and video installations.

The current presentation will also feature the series of photographs ‘Hidden City, 1994/2010’, which will be on view this November at the Tate Modern in London. The series is a new collection of photographs that Rosefeldt originally took in 1994 and 1995 in the buildings of the former Nazi Party headquarters on the Königsplatz in Munich and in the surrounding area.

On view will be also be the series ‘Detonation Deutschland, 1996’ (in collaboration with Piero Steinle), which shows demolitions of buildings in Germany from 1945 until the work’s creation in the mid-1990s. ‘Archive of Archives, 1995’ is a series of photographs, for which Rosefeldt visited and documented places of collecting in his native city of Munich.