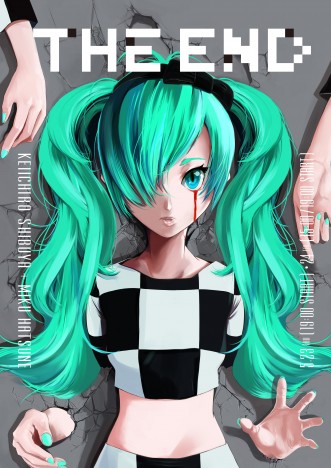 A new opera “THE END” by Keiichiro Shibuya, Hatsune Miku will be held at the Orchard Hall which is known for opera and classical opera.

THE END is an opera birthed out of the collaboration between trend setting spirited young individuals including musician and artist Keiichiro Shibuya, director and script writer Toshiki Okada, and illustrator YKBX. This production does not feature any humans, and replacing all familiar elements of the non-existent singers and orchestras are aria and recitative by Hatsune Miku and Vocaloid, with a story told by computer made music and visuals. Orchard Hall is well known for classical music and opera performances because of its 10.2 channel surround sound and 10,000 plus lumen seven piece high resolution projector set, making for a fortified digital environment to begin Miku’s self inquiring quest as she asks “Will I die?” This production tests taking the traditional tragic structure of an opera asking “What is death?” and “What is an end?” and puts Hatsune Miku as the mediator to reread it in a modern way.

Also much talked about is Hatsune Miku’s opera wardrobe, which was designed by Louis Vuitton’s artistic director Marc Jacobs and his studio team. Her outfits were based on the Spring/Summer 2013 collection, making an originally designed product that takes into account Miku’s body shape and unique aura, making an impacting ensemble as Miku is digitized in videos, which reflect the current times, and show a new side of her and making for a never before seen collaboration. Also noted was stage art done by Rem Koolhaas’ New York studio representative and carpenter Shohei Shigematsu.

The 1st overseas performance of the opera “THE END” in Paris, France at the Théâtre du Châtelet on November 13th and 15th.