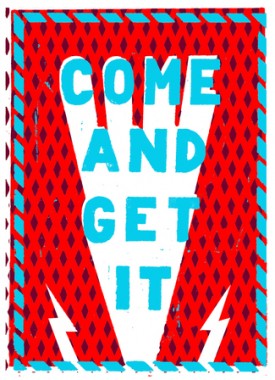 On Wednesday 17th August, Sanderson will host the latest exhibition of graphic works by Paul Bower, curated and produced by Pocko. Come And Get It features a collection of screen and block-prints by the South-London based artist. Here, Bower exhibits his favourite “lost, but not forgotten” song lyrics, and an array of instant, throw-away messages. His typographical posters play with the familiar and the recognisable in popular culture; twisting the meaning of words to amuse and confuse the audience.

Bower’s signature style balances between candy-floss characters, raw typography and razor-sharp wit. His technique is varied, but always packs a punch, using a range of lino-cut and screen prints, acrylic paint, ballpoint pen, paper-cuts, stenciling, and collage to create his pieces. In an age where media is saturated with overly-polished imagery, Paul Bower’s somewhat “unfinished” approach proves a breath of fresh air. The exhibition will run until Wednesday 31st, 2011 at Sanderson Hotel in London.