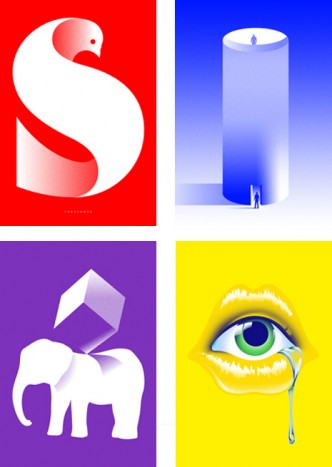 Jonathan Zawada’s exhibition of poster prints “Freedumb” will bea held at the Vallery in Barcelona from April 28th – June 2nd, 2011.

Freedumb’ is an exploration of this divergence in two parts. The first part is a series of graphic, illustrated posters that utilize modern, mass market oriented image production techniques and a modern design language to communicate personal ideas, values and feelings. In contrast, the second part consists of a selection of programming based images that are the result of his attempts to strip away his controlled and methodical approach to image making, leaving the resulting images very much defined by the tool itself and reminiscent of cave paintings or primal landscapes.