Nothing is left to chance: the frames of the photos are made from recycled materials like cans or tyres, which get a second life and recall the patterns and colours of the protagonists of the pictures. A way to express his critic point of view towards a consumer society, but also to question about identity, tradition, with a particular view on the figure of the woman and the veil.

The series “Kash Angels” plays exactly with the stereotypes of veiled women: here, a group of henna tattoo artists, wearing a traditional veil and heart-shaped sunglasses, are riding motorbikes. They are the “Kesh Angels”, “Kesh short for Marrakech”, and “Angels from Hell’s Angels”, and they subvert the Western image of the veil as a symbol of oppression. 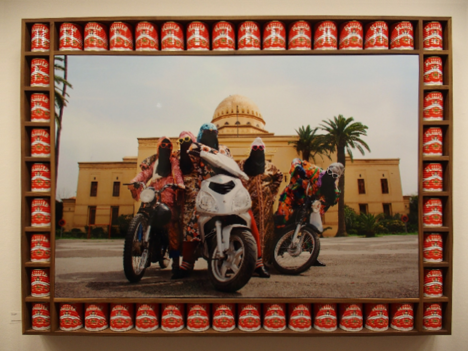 In his work, he mostly recreates a photographic set, in which people and friends take part. A room is entirely dedicated to the people who influenced him, “My Rock Stars”. Filmmakers, hip-hop dancers, musicians, cooks… his heroes and inspirations. 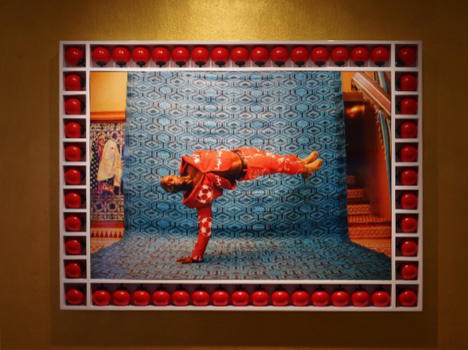 Loic Mabanza, from the series My Rock Stars, Hassan Hajjaj, 2018

After the exuberance of flashing colours and images, the exhibition ends with the series “Handprints”. Hassan Hajjaj reveals a more atypical part of his work: a sort of documentary series in which the human is always in the centre, but the hues and the situations are those of the everyday life.

The entire exhibition is a total work of art, in which each surface is employed and each detail is perfectly pondered. As in a real house, he imagined wallpaper decors and lounges made of boxes, a warm mix of everyday objects that we rarely meet in a museum context. He completely transformed the MEP into the “Maison Marocaine de la Photographie”. At first, the kitsch and pop aspect would almost distract from the criticism subtly submitted by the photographer, but the ensemble of the exhibition perfectly reveals the energy of a country often reduced to stereotypes. The artist put women and people met on the streets at the centre of his visual research, overturning the ethnocentric Western perspective. 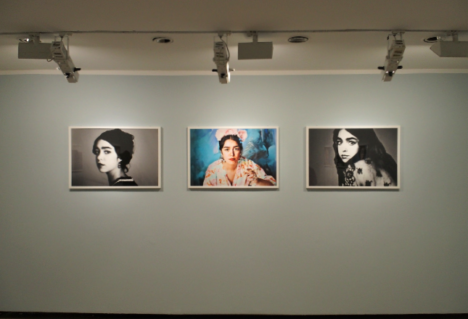 During the exhibition, Hassan Hajjaj himself invites two Moroccan artists presenting their work in the Studio of the MEP, the space dedicated to young talents: Chronique d’une jeune arabe of Zahrin Kahlo (until 13th October) and Primary Colours of Lamia Naji (from 18th October to 17th November).