In the main exhibition of the Arsenale the visitor is welcomed by a huge painting of the American artist George Condo “Double Elvis” (2019), which symbolizes the deterioration of American values. This inaugural painting is follow by the series “Angst” (2013-2017) by Soham Gupta depicting marginalized population of Calcutta and a video “48 War Movies” (2019) of Christian Marclay who brings together 48 war movies layered one on top of another, with just their outer edges visible. 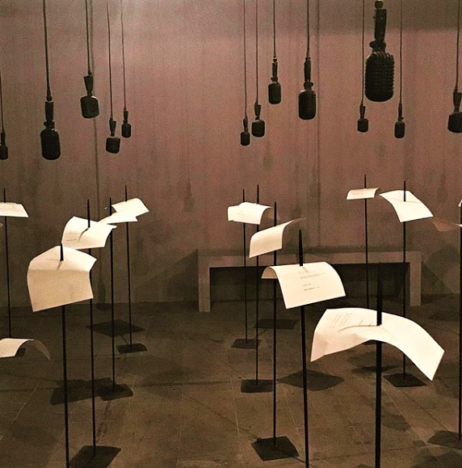 The artists are questioning times of mutations, frightening, conflictual and chaotic.
The Indian Shilpa Gupta proposes an overwhelming installation “For, in your tongue, I cannot fit” (2017-18) which faces the censorship of poets jailed for their political engagement. This installation saturates the space with numerous poetic texts and engages the visitor to walk around while the speakers coming down from the ceiling broadcast the reading.

Among the dozens national pavilions, some have particularly stuck our attention for the contents and the curatorial choices.

The Luxembourg Pavilion with the artist Marco Godinho, questions the relationship that the human being has with the sea. In his project “Written by Water” (2019), in a poetic and political way, he raises the question of water in the Mediterranean area reflecting on the phenomenon of migration. 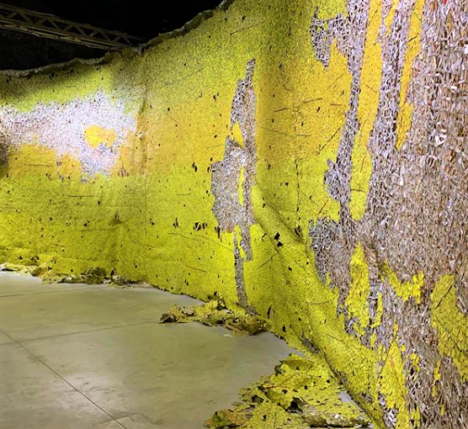 Jos De Gruyter and Harald Thys turn the Belgian Pavilion into a folk museum, populated by twenty disturbing robotized puppets in the guise of artisans (a shoemaker, a spinner, a knife grinder and others), who conscientiously carry out their respective jobs, surrounded by a population of zombies, poets, lunatics, psychotics. These two worlds coexist in the same space, but seem completely unaware of each other. In “Mondo Cane” (2019) (the title follows that of an Italian pseudo-documentary released in 1962), they use realism as a tool of social criticism and find their way even outside the pavilion, thanks to a volume and an internet site which will complete and diffuse the project.

In the Chilean Pavilion, the project “Altered Views” (2019) analyses the colonial history between the seventeenth and twentieth centuries. The project by Voluspa Jarpa is divided into three spaces – The Hegemony Museum, The Subaltern Portraits Gallery and The Emancipating Opera. Result of years of research, the artist intends to reverse the perspective (that of the hegemonic countries) with which colonialism is usually read, thus inviting the public to question the “hegemonic points of view” in the story of the great historical facts.

The Lithuanian Pavilion, winner of this edition, takes the form of a beach on the ground floor of the ‘Marina Militare’ that on the second floor allows visitors to watch from above the coordinated and harmonious movements of a group of bathers immersed in an expanse of sand. “Sun & Sea” is a work-performance played by figurants who sing a multi-voice melody dedicated to the space-time of the holidays. The collective Neon Realism (Lina Lapelyte, Vaiva Grainyte and Rugile Barzdziukaite) makes a critic on free time and contemporaneity, their project is a colourful and original tableau vivant which focuses on climate and human condition.

After this short review of the most interesting artists and pavilions of the 58th Venice Biennial, we can admit that this edition is perfectly focusing on the present, from the thematic approached, to the exclusive participation of living artists.
The overall narrative of the exhibition is compelling, even if sometimes the display of the central exhibition seems to preset possible reflections on the subjects faced by the artists, not leaving enough space for elaborating a personal one. But overlooking this personal consideration, this edition is a fantastic overlay of languages, images, visions and suggestions.
It is an edition in which female artists hold finally an important number; a Biennial in which the relation between fake and truth, the topic of climate change, the socio-economic issues of this time, the evolution of Artificial Intelligence and technologies are all part of a contemporary contemplation, and a look towards an uncertain future.