The symposium titled “Who Has A Right to Revive Soseki – Think of the Basic Principles of Androids of Great-People” was held at Kudan Campus of Nishogakusha University, Tokyo on August 26th, 2018 and began with an opening performance of the Soseki Android drama “Letter”. The Natsume Soseki Android is a project by Nishogakusha University and Osaka University for educational purposes, such as lectures being read by the revived Soseki Natsume.

In addition, the Android drama is a continuous project called “Robot Drama” created by the cooperation of robotics engineer Hiroshi Ishiguro and playwright Oriza Hirata. In the play, the android speaks his lines and performs along with other actors and actresses. In 2008, it performed for the first time at Osaka University, and it also played as the opening act of an art performance at the Aichi Triennale 2010. In the “Robot Drama”, typical robots, which everyone can picture, were utilized. On the other hand, for the Android Drama, real human-like androids known as Geminoid, which were invented by the Ishiguro Lab, performed on stage. 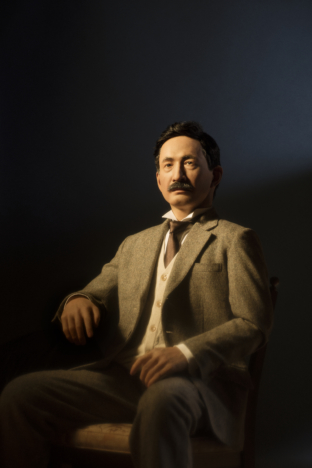 Even though a Geminoid looks very similar to human, it cannot walk and the upper half of its body still moves unnaturally. By giving these performers limitations in the performance, the director has neutralized the uncanny nature (the uncanny valley – the degree of an object’s resemblance to a human being and the emotional response to such an object) of androids, which is the anxiety of people when an android starts to look very human.

“Letter” is a two-person drama by actress Minami Inoue and the Soseki Android. Oriza Hirata criticized theories that demands performers express their inner characteristics and proposed a different methodology – the act can be composed of outer aspects only which are created and guided. To add human characteristics to the Soseki Android on stage, he utilized theatrical techniques including pausing, timing of response, sequence of lines and the actress’s responses too. 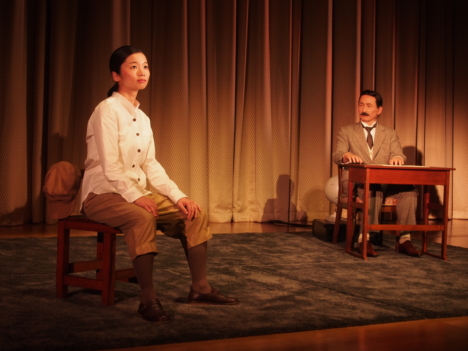 The Soseki Android remains sitting on the chair. Inoue is acted out by Masaoka Shiki as the only friend who understands Soseki and his literature. Inoue appears on the stage where Soseki Android is sitting under lights. He says to Inoue;

Nobo was Shiki’s name in childhood. According to Hirata, the drama “Letter” is the world of Soseki’s mind or dream. When he studied in England, he exchanged letters with Shiki. This play is based on that exchange.

Many existing letters from Soseki are about his complaints and in contrast, Shiki was always positive. However, when Shiki had tuberculosis and was dying, he wrote something negative in the letter. In the latter part of “Letter”, that scene was played out as Shiki said “it’s all up to me.”

At that time, Soseki only wrote letters about interesting memories in London. The performance uses lines in the drama which were edited from real letters, but the last two letters read out at the end are direct quotes. This scene, of the friendship between Soseki and Shiki, leaves a lasting impression.

What was interesting about this drama was that the empathy for the Soseki Android becomes stronger as the play goes on. Somehow, there is a difference of empathy for the android between men and women. Men insist on their attitude to treat an android as an object. Meanwhile, women tend to feel as if it is a living thing.

“Letter” is a play, which dramatizes important scenes of modern literary history, and makes literature feel more accessible through the friendship of Soseki and Shiki. Furthermore, as 2016 marked 100 years since Soseki’s death his existence is becoming more distant for younger generations. But, this play has the potential of reaching young people by bringing Soseki back to life in front of their very eyes.