21_21 DESIGN SIGHT has acquired plenty of praise since its opening in 2007. This exhibition space is not for art exhibitions only but to show the importance of design in any kind of format it can exist in our everyday life. Legendary Japanese musician and producer Keigo Oyamada AKA Cornelius teamed up with web and interface design wizard Yugo Nakamura, who conceived and directed the exhibition, and Masamichi Katayama – a renowned Japanese interior designer who runs Wonderwall. – to present this exhibition titled “AUDIO ARCHITECTURE” in a combination of music, layers of tone, sonic range, and rhythm forming a densely designed structure. To top it off, several artists – nine creators who challenge new modes of expression with original sensibilities in a crossover of film, animation, dance, graphic design, illustration, programming and media design – have contributed with their own interpretation of Cornelius’ musical composition into disparate video works, where all the pieces are displayed in sync with the audio at the time. It is all about to integrate sound, video, and space. 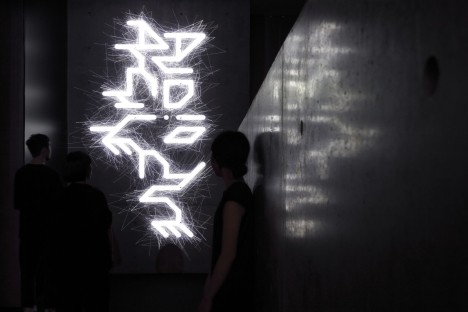 Cornelius wrote this music piece exclusively for this exhibition. The lyrics were written by Nakamura. It is really interesting how each piece of video work contributes to the exhibition in a different fashion thus the fact that Cornelius’ composition repeats in loop over and over doesn’t really feels repetitive or well, it doesn’t really bother the visitor who instead experiences different moods and universes. Every single aspect of the exhibition relates to the music, all elements work in sync with the music, so to speak. That’s why the exhibition tries to construct a type of “audio architecture” by repeating the music paired to various films over and over, in the same space dynamically designed by Katayama. 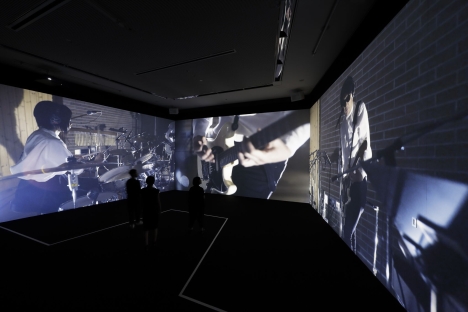 In the own words of Nakamura himself, “I was reading an article about Sean Ono Lennon at GINZA magazine where he described Cornelius music: “He paints a kind of audio architecture” Audio architecture! That was exactly the expression I was looking for, and I begun to think about a composition of exhibit based on these words, and it became “AUDIO ARCHITECTURE” Exhibition.”

The fact that all the elements in the exhibition are in sync and relate to the music creates a continuous harmony. “Music is not something seen with the eyes but hear by the ears […] it is a phenomenon of the present moment that flows to the past – we feel music is something special and different, isolated from the visual-oriented spatial world,” Nakamura continues and he concludes, “I invited artists and designers who use unique methodologies for their expressions and design activities to enrich and re-interpret the protocol “audio architecture”.