Cantor was born in Romania in 1977 and currently lives and works in Paris. In Japan, he participated in Yokohama Triennale 2011, Ichihara Art x Mix 2014, and Will Happiness Find Me?, which is a group show at Tokyo Opera City Art Gallery in 2014. He works on photography, sculpture, video, and installation. He became known by a video work “Deeparture” (2005), which filmed an awkward relationship and tension between a deer and wolf and was projected on the white-cube gallery. “Adjective to Your Presence” is his first solo show in Japan.

His work makes you realize the complexity and uncertainty of the usual world. In this exhibition, he shows new three work inspired by the venue Ginza Maison Hermès designed by Renzo Piano. He has focused on transparency as a major concept for ten years and the new work responds to the architectural feature of glass blocks. 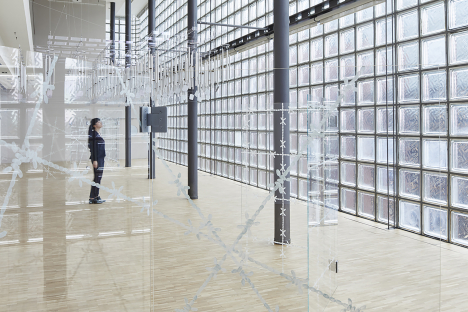 For “Are you the wind?”, the gallery installed a room with two doors by separating one space. Opened the entrance door, there goes the wind chimes by interlocking with the door. Those chimes are not specially made, but sold in United States. This work could be interpreted that the wind, that rings the chimes, is made by you who open the door. The clear sound even changes the texture of air in the gallery. 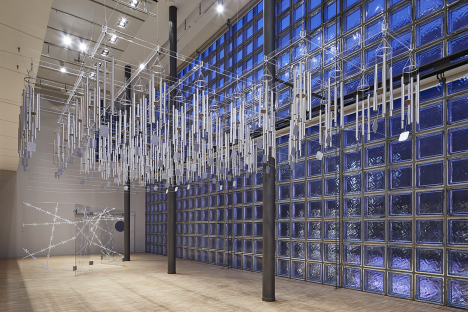 In the same room, “Breath separator”, which he draws barbed wires with his fingerprints on the Japanese traditional folding screen made by glass, is exhibited. This is based on his surprise that the US immigration is taking 10 fingerprints of every traveler after 9.11. He felt uncomfortable to be forced to give the most personal information and the work comprehends antithesis of showing it as art. 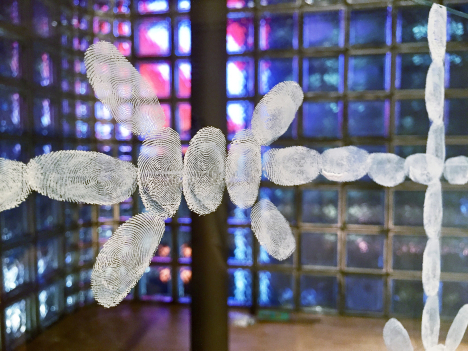 Each ellipse of fingerprints is not too large, but fingerprints can be easily recognized because they exist powerfully as a sign of identity. The height of the glass screen is same as his height of 173 cm. The width is decided by the golden ratio. Depending on the light from the wind, reflective light on the glass is removed and the barbed wires independently stand out.

The Japanese folding screen called Byobu is usually used as a partition. But, it was originally made for a windbreak. It is unexpected that both the wind chime and glass screen share the same concept of wind. The next room is for “Adjective to Your Presence”, which is also the title of this exhibition.